Zoisite is the third general of Queen Beryl. In the manga he was formerly a general to Prince Endymion. In anime, he had a romantic relationships with Kunzite. He was changed to a woman in the English dub, and was called Zoycite.

Zoisite is the third of the Shitennou to appear. He appears in volume 01 act 03 with Nephrite, pondering the appearance of the Sailor Senshi, although he is not named until act 05, after Nephrite's death. Zoisite is the commander of the Dark Kingdom's European division, as he states in act 06. He is about the same height as Jadeite, and his estimated age is 16-17 according to the Materials Collection. After Nephrite falls, Kunzite warns Zoisite that he must be careful, lest the same thing happen to him, and the reputation of the Shitennou be tarnished.

The Dark Kingdom finds out that Sailor Moon is also seeking the Silver Crystal, and Queen Beryl instructs the Shitennou to obtain the Silver Crystal in order to provide energy to their great ruler, Queen Metalia. Zoisite vows to do the job. Zoisite disguises himself as a woman who is researching the crystal, Professor Izono, and appears on television claiming that the Silver Crystal has the power to provide eternal youth, and hypnotizes viewers into frantically searching for it. When the Silver Crystal is not found, Zoisite begins using television sets to steal energy from viewers. Usagi's energy is stolen, but Tuxedo Mask comes to her rescue. Sailor Mercury, Mars, and Jupiter confront Zoisite at the television station, but he vanishes before they can fight. Sailor Moon then uses her new recovery power (employing the Moon Stick) to save people.

In volume 02 act 07, Zoisite begins suspecting that Sailor Moon's power stems from the fact that she has the Silver Crystal, so he starts a video store called Rental Shop Dark. All of the videos in the store brainwash viewers with a subliminal message, inciting them to capture Sailor Moon and get the Silver Crystal. The students of Juuban Junior High school are acting strangely, so the senshi check the store out. They discover the hidden message on the tapes, and Sailor Moon heals those who watched the tapes with Moon Healing Escalation. The senshi finally reach Zoisite, but Sailor Moon's Moon Twilight Flash attack doesn't work on him. He grabs Sailor Moon from behind in chokehold, and demands that she tell him where the Silver Crystal is. Just as he is about to stab her, a boomerang knocks the knife out of his hand, and moments later, and second boomerang slices him apart. The boomerangs were those of Sailor V.

Zoisite also appears later in the short side story "Casablanca Memories." He again disguises himself as a woman - this time, he is a piano player at the Rain Tree restaurant. The Dark Kingdom creates music boxes which cause people to remember the past when they hear the music - the boxes drain the energy of humans. One is controlling Makoto, and Rei destroys it. She transforms into Sailor Mars, goes to the Rain Tree restaurant, and attacks Zoisite - but Zoisite disappears, angry that he could not avenge Jadeite's death.

In the manga, Zoisite is very effeminate, but he is not Kunzite's lover, as he is in the anime.

Zoisite's first appearance in the anime was during Nephrite's first episode of planning to drain energy. He dislikes Nephrite very much and always taunts him when one of his plans fails, and he was very disappointed once when Nephrite was still in charge. Upon realizing that Nephrite betrayed the Dark Kingdom, he sent three of his monsters after him. One of them killed Nephrite and took his Black Crystal, though the Sailor Senshi killed his three servants. Zoisite’s official first episode of being the in charge begins after Nephrite's death, where he uses the Black Crystal to locate the people with the seven Rainbow Crystals inside them. He got some of them, however Tuxedo Mask also got some.

Eventually Zoisite challenged Tuxedo Mask to a duel for the Rainbow Crystals, under orders from Queen Beryl to bring him to the Dark Kingdom. Zoisite deliberately disobeyed Queen Beryl by attempting to kill Mamoru Chiba with fire in the elevator (ironically bringing Usagi Tsukino, who was really Sailor Moon, with him by mistake), then stabbing him with an ice crystal, nearly killing him. When the Rainbow Crystals united into the Silver Crystal, Sailor Moon transformed into Princess Serenity, the Moon princess, and defeated Zoisite with Moon Healing Escalation. Upon his return to the Dark Kingdom, Zoisite was killed by Queen Beryl for his disobedience. He died in Kunzite’s arms as Queen Beryl tells Kunzite to let Zoisite's death be a warning to him if he ever harms Prince Endymion.

In the second last episode of the first season, Zoisite was seen in a flashback of when the Dark Kingdom invaded the Moon Kingdom, standing beside Jadeite, Nephrite, and Kunzite. He was also mentioned by a dying Kunzite, who knew he was about to meet him on the other side.

In the live-action series, not only was Zoisite's appearance and uniform drastically altered, but his personality was as well. He was much quieter and more subdued than his prior incarnations, and was rather obsessed with protecting Prince Endymion.

Zoisite is the third of the Shitennou to appear. He appears briefly in Act 6, but is really revealed in Act 7. He plays piano, and can use his music to teleport or link to targets, including Sailor V, who he is very interested in finding - Queen Beryl gives him the task of killing her. Zoisite is played by Yoshito Endo. 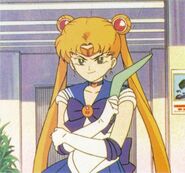 Zoisite disguised as Sailor Moon in the twenty-ninth episode.
Add a photo to this gallery

Voiced by Kirsten Bishop in the English anime

Retrieved from "https://sailormoon.fandom.com/wiki/Zoisite_(manga)?oldid=20004"
Community content is available under CC-BY-SA unless otherwise noted.