Only Jadeite and Nephrite created a youma to find the Silver Crystal and gather energy. Jadeite made two youma from dust before he perished. One disguised itself as Mayumi Osaka, who sold jewels to steal energy from the customers, before she was destroyed by Sailor Moon. Jadeite sent a second youma to brainwash students of Crystal Seminar to find the Silver Crystal, and Sailor Moon, assisted by Tuxedo Mask and a newly awakened Sailor Mercury, destroyed her. After Jadeite's death, Nephrite sent a youma, made by his shadow to try to steal a treasure of D Kingdom, believing it to be the Silver Crystal. It was destroyed by Sailor Moon, and the Dark Kingdom generals did not use any more youma, taking direct action instead.

In the early episodes of the first season, when the Youma were destroyed they did not say anything. After Sailor Moon began using Moon Healing Escalation on the Youma that were made from humans, the Youma would say "Refresh!" when they were destroyed while restoring the forms of the victims.

Also, the Youma under Jadiete and Nephrite's control were independent of humans and could be destroyed, while the majority of Youma under Zoisite and Kunzite's command were humans unwillingly transformed into Youma until Sailor Moon healed them, turning them back into humans.

Any Youma sent by Jadeite usually had a human disguise (often impersonating someone else) to help Jadeite attach his items (which are charged with dark energy) to people to steal the energy from them. Once the Youma is destroyed, the energy gathered would be returned to the victims. All of them appear monstrous in their true forms. Most are killed by Sailor Moon, but one is killed by Sailor Mars.

Murido
Add a photo to this gallery

Unlike Jadeite, who tried to steal energy from multiple people at once, Nephrite operated by finding a single person whose energy is about to reach its peak. To do this, first he would consult the constellations to locate a potential target, then he would approach them, usually under the pseudonym of Masato Sanjouin, and implant a Youma in an object (normally an object usually handled by his target). The Youma would begin to alter the victim's personality, causing them to become obsessed and consumed with their task, becoming hostile to others, and sometimes gain supernatural abilities. When the person's energy reached its peak, a Youma will emerge from the object (with its appearance or abilities somehow related to the object or obsession) and steal the victim's energy. The victim regains their energy when the Youma is destroyed.

It is important to note that the Soul Shadow is not a pure Youma, but rather an apparition of Nephrite. It is also interesting to note that Regulus and Soul Shadow (interestingly enough, the only two male servants of Nephrite) were not summoned the same way as the others, nor were they involved in an energy-absorbing plot. 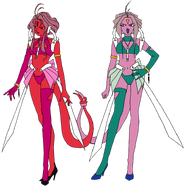 Soul Shadow
Add a photo to this gallery

Zoisite has at least five regular Youma working for him. Four of them were the standard Youma that were destroyed by Sailor Moon. After Nephrite dies and Zoisite takes over, his task is to reawaken the Seven Great Youma inside people who carry the Rainbow Crystals. Thus, whenever he takes a crystal, he transforms them into a Youma, which in the "Rainbow Crystal Carriers" case, is the shadow within them. He can also change other people into monsters, as shown when he does this to an actor. To destroy the Seven Great Youma and heal the victims, Sailor Moon must use her Moon Healing Escalation on them.

Akan
Add a photo to this gallery

The Seven Great Youma were the most powerful monsters of the Dark Kingdom. They were defeated and trapped inside the seven Rainbow Crystals, and were reborn as normal humans on present day Earth after the destruction of the Silver Millennium. The Youma, as well as a crystal, were sealed inside a specific person (one of them inside a cat). One by one, Zoisite awakened them by transforming the person carrying the crystal into a monster, but each Shadow was destroyed when the monsters were healed by Sailor Moon. They have the ability to merge into an even more powerful Youma when brought together, but Sailor Moon and the four other scouts prevent the seven from gathering and thus this combined Youma did not come into existence.

Bakene
Add a photo to this gallery

Like Zoisite, Kunzite usually works by changing innocent people into Youma, where Sailor Moon must heal them. At one point, he turns several people into a single monster. When he transforms Misha and Janelyn, they retain their original names. Unlike Zoisite whose task was to collect the crystals, Kunzite's objective (and therefore the objective of his monster-victims as well) is purely to find and destroy Sailor Moon and get the Silver Crystal from her. The difference from the victims Zoisite turned into monsters is that Kunzite's monsters can resume their human forms whenever they want (though they remain evil until they are healed by Sailor Moon's Moon Healing Escalation).

Oniwabandana
Add a photo to this gallery

Queen Beryl had high-ranking Youma that worked for her.

DD Girls
Add a photo to this gallery

Unlike the manga, most of the Youma in Pretty Guardian Sailor Moon did not have names and were summoned in an inconsistent manner. Some of them were created from stones that were infused into objects which turned the object into a Youma. Others were simply summoned. After Queen Metaria's power began to grow in reaction to the Silver Crystal's power, a new type of Youma were created. The new Youma were all identical to each other, were weaker than previous ones and only appeared together in groups. The costumes for these entities are recycled from the Golem Soldiers/Putty Patrol from Kyōryū Sentai Zyuranger/Mighty Morphin Power Rangers with hooded robes added.

In Act 41, Metaria also summoned a single Youma where the hooded robed Youma piled onto each other. This Youma which drained energy from people throughout Tokyo, leaving them comatose. In Act 45, Metaria herself controlled this Youma, but was forced back out by Sailor Venus before Sailor Moon destroyed it.

In the Final Act, Princess Sailor Moon summoned a group of white Youma to slow down the Sailor Senshi so they could not stop her from her plan to destroy the Earth.

In the Special Act, Queen Mio summoned two Youma named Sword and Shield, two youma that had actual names. Along with them, she also used a group of clown-like Youma called "Pierrot." Queen Mio turns into a Youma in special act.

In the musical Gaiden Dark Kingdom Fukkatsu Hen and its revision, there was a Youma named Manegin who disguised herself as Haruna Sakurada. Manegin also had control of other youma who acted under her control. Manegin, along with the DD girls who were in the first two musicals, reappeared in the Sailor Moon Super Spring Festival.

In the video game Sailor Moon for Super Famicom, there were three original Youma characters designed by Naoko Takeuchi: HiraHira, MuchiMuchi, and GoroGoro. Also, there were enemy versions of Garoben, Gamecen, Akan, and Jiji while Bakene and Murid were bosses.

In Crystal, the youma's role was almost identical to the manga. Jadeite was shown to create youma from dirt, giving them form and life, like he did with Morga and Garoben. However, Nephrite sent his shadow to steal the D Kingdom's treasure, rather than use a youma, and he had a youma disguise itself as a mannequin bride to steal energy.