Wiseman appears as a hooded figure in a purple-black cloak. His hands are visible, and they appear to be dark multicolored. When his face was revealed, his head was a skull.

Wiseman was at one point a human being who lived in Crystal Tokyo and possessed dark powers which he used to unleash chaos to the populace and brainwash people to rebel against Neo-Queen Serenity. He was banished using the power of the Silver Crystal to the barren 10th planet named Nemesis because she couldn't kill him as a human being, Nemesis was then marked as the forbidden planet. From there, Wiseman merged his spirit with the planet and became one with Nemesis. He cloaked his decayed and crumbling human body, and went to Earth seeking revenge. He convinced residents that the 30th century utopia to become rebels and told them he wanted to destroy Crystal Tokyo, the reason behind this being that The Silver Crystal gave all of the residents immortality, which they were brainwashed to believe was blasphemy against god and unnatural as all humans are supposed to age and die. Thus the Black Moon Clan was born. He led them in an attack on Crystal Tokyo using the power of the Evil Black Crystal from Nemesis, as a result, Crystal Tokyo was left in ruins and Neo Queen serenity was placed in a coma induced state. The 4 Inner Guardians and King Endymion we're placed into suspended animation. After this, Wiseman told his followers to travel into Sailor Moon's past to obtain the Silver Crystal so that he could rewrite the future and have his revenge.

As it was shown, he cares little of his pawns and even kills Rubeus. When faced with a new conduit for power, in the form of Chibiusa, Wiseman makes her his Black Lady. When Demande comes to his senses and blasts the Wiseman, the decayed body shatters, but Black Lady only laughs and reveals that Wiseman is Nemesis. With all of his followers gone, and Black Lady reverted to Chibiusa, he creates a dark energy swirl to kill the Sailor Senshi. Sailor Moon and Sailor Chibi Moon attack the planet with a Double Moon Princess Halation and he is destroyed.

During Sailor Galaxia's flashback, she once overheard a "mysterious cloaked figure" referring to a place where all stars are born, telling her that the place was Sagittarius Star Zero. It is also revealed that Wiseman, like Queen Metalia, Pharaoh 90, and Queen Nehellenia, was an aspect of Chaos, who used the incarnation of Wiseman to manipulate to set Galaxia on the path to serving his goals.

He has total power over the element of darkness, shadows, chaos and the shadow realm itself. He possesses the incredibly strong prophetic ability to see into the distant future, and foresee the outcome of certain events. He has complete control over the supremely powerful Malefic Black Crystal he has, and utilize its evil abilities to vast proportions of destructive energy.

Art of Wiseman from the Materials Collection 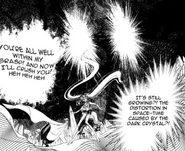 Retrieved from "https://sailormoon.fandom.com/wiki/Wiseman_(manga)?oldid=239351"
Community content is available under CC-BY-SA unless otherwise noted.