Vivian is an agent for the Dark Agency and only appeared in Codename: Sailor V.

Her name could be a reference to the mineral Vivianite.

In Codename: Sailor V, she is the leader of a gang who constantly fights against Saitou's over the park, but her true plan was to fight against humans and to steal their energy. Once their power is absorbed, she brainwashes them and turns them into her minions. Sailor V found out about her evil intention and killed her with Crescent Beam. 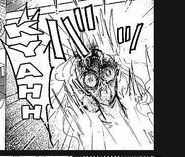 Vivian's death
Add a photo to this gallery