Viluy (Byruit in the CWi English Dub) is the fourth of the Witches 5 to confront the Sailor Senshi.

She has the same appearance as in the manga.

In the anime, Viluy only lasts one episode against the Sailor Guardians. She tied with Ami for the top marks of an exam, then devised a plan to use her master computer to extract the Pure Heart from all the exam takers. Sailor Mercury fought Viluy in Mugen Academy, and Viluy attacked her and Haruka and Michiru, who transformed into Sailor Uranus and Sailor Neptune to fight her. The other Sailor Senshi arrived, and Sailor Moon used Rainbow Moon Heartache, damaging her nanocuff.

Unaware of the damage Viluy used her attack again which then turned against her. The surprised witch screamed to her nanomachines that they had the wrong target but to no avail. As she fell to her knees, Sailor Mercury taunted Viluy with her own words about the heartlessness of machines. The other Senshi gathered around and silently looked down on Viluy as she was slowly being dissolved by her own nanomachines. After her death, Sailor Mercury picked up Viluy's nanocuff and states that the witch got what she deserved for only trusting computers and abandoning love. The cuff then dissolves as well, leaving no remains of Viluy behind.

Viluy seems to hate Kaolinite for doing nothing but flirt with Professor Tomoe, at one point knocking her down. Kaolinite, likewise, is satisfied with her death. 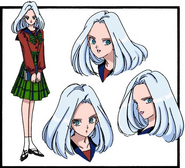 Official Profile of Viluy in disguise. Art by Ikuko Itoh.

Viluy in her civilian form

Viluy in her real form 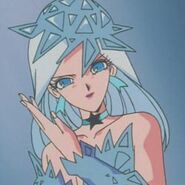 Viluy with a devious look in her eyes

Viluy is killed by her own nanobots.
Add a photo to this gallery

Retrieved from "https://sailormoon.fandom.com/wiki/Viluy_(anime)?oldid=217756"
Community content is available under CC-BY-SA unless otherwise noted.