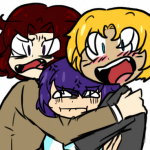 I, like many other people on the internet, have Asperger's, so just take anything overtly awkward I say with a grain of salt. Also, any fan pieces on this page were made by me and, if involving any screenshots, were all used from this Wiki. Don't get mad.

Let's see, what topics can I ramble about on here that seem irrelevant but don't because they're tangibly related to this Wiki...?

Well, for one thing, I am one of the very few (if not one of the only) members of the Sailor Moon fanbase who did not grow up with the franchise as a kid. LE GASP! I KNOW! MY CHILDHOOD IS ALL A HOLLOW LIE! D8 Part of the reason for this is because the anime and manga were released and completed before I was born or right on the same year, so up until I was about twelve, my only knowledge of the franchise was the existence of the inner Senshi, and the fact that the weird pink-haired chick was Sailor Moon's daughter. Another big factor of my late arrival was the fact that Naoko Takeuchi's art style really didn't appeal to me as a kid, who was more interested in the MOE MOE KYUN style I had grown accustomed to. I had tried to order the first three issues of the manga from my library, but I kept on only getting volume 3. Also, this was back when I would only watch dubbed anime as opposed to subbed, and when I tried to find episodes of Sailor Moon, I was unable to find the dub, so I had assumed that one was never made.

I only wish I was making this up.

When I reached the aforementioned age, I guess something inside me knew that I needed to jump on the bandwagon, and I read the first four chapters of it on Mangafox. I don't remember what my initial impressions were at the time (apart from a small degree of confusion when they started mentioning Codename Sailor V), but I guess I must have liked it, because it inspired me to write a story XD Whiiiiiich....never truly got off the ground. I should really revisit that concept. Eventually I fully immersed myself in the manga when I was around fourteen and Kodansha USA started rereleasing the volumes, and I didn't begin watching the subtitled anime until early May 2014 (I was sixteen at the time). In the end, I think it's a good thing that I got into the series so late. I probably wouldn't have liked it as much as I do now, but I'm still a little sad that Sailor Moon wasn't as huge a part of my childhood as it was for most other people.

A few of my favorite things

Can I get back to you on that one?

Retrieved from "https://sailormoon.fandom.com/wiki/User:Elle_Baston?oldid=144789"
Community content is available under CC-BY-SA unless otherwise noted.