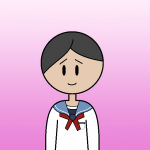 Sailor Andriux is the future guardian and the future Sailor Senshi. His work as a guardian was revealed after the events of Andriux's Omni-World.

Andriux is considered as one of the smarter teenagers out of his age. He is often reffered as Andriux, and rarely as Andy or Little Andy, which made Andriux embarrass himself.

Throughout various battles and experiences, Andriux eventually develops into a more mature, confident, and reliable individual, both as a guardian and as a hero. However, he has his crybaby moments now and then.

So far, he's not seen in the serie but he has light skin and short, messy black hair. He has blue eyes. He is 159 cm tall (5 feet, 2.59 inches), weighs 44 kg (97.0034 lbs). He's seen wearing a white shirt and with a red mini-scarf, a matching navy blue skirt, white and red socks, and brown boots. He also has his Hero-trix, which was then as a resource for his emotions in a later time. He has his tiara in his forehead as well as the other protagonists.

His history is not yet revealed.

Andriux in the series started out as a whiny and sometimes a bit selfish boy. He was obsessed with girls and love, always desiring to to find a girlfriend for himself. When he was forced into battle by San Andy, he was very reluctant and ever so slowly began to gain confidence through his battles with the Hero-trix, and even managing to find his love, Jaidy-chan. Eventually he matured into a confident, strong teenager, who will embrace his powers as a sailor senshi. And was willing to fight for his friends and the safety of the universe.

As a protagonist and hero, Andriux has one of the best special powers of any character in the series. His physical attacks, usually one-offs and not always successful, include the occasional use of his Hero-trix as a weapon and hero changer. One of his techniques was revealed to be a "Crying Amplyfier", which involves using his watch in a light blue color on the plate to amplify his screams.

Retrieved from "https://sailormoon.fandom.com/wiki/User:Andoryu-chan?oldid=209510"
Community content is available under CC-BY-SA unless otherwise noted.