Start a Wiki
"I am the Pretty Guardian who Fights for Love and for Justice. I am Sailor Moon! And now In the name of the moon, I will punish you!"
— Sailor Moon's introduction

Usagi Tsukino (月野 うさぎ, Tsukino Usagi) is the warrior of love and justice, Sailor Moon (セーラームーン, Sērāmūn). Originally from a prosperous civilization on the Moon known as the Moon Kingdom, she was reborn on Earth and re-awoke as the leader of the Sailor Senshi.

Usagi has blue eyes and long blonde hair that she wears in odango.

The outfit that Usagi usually wears is a blue middle-school sailor fuku uniform. The uniform has a blue sailor collar with two white stripes. She has a red ribbon on the front of her uniform, which she ties her magical locket to. She has a white blouse with blue sleeve-cuffs, with three white stripes, like the collar.

In the summer, she wears a white, short-sleeved blouse with puffed-sleeves. She has a blue pleated skirt with a blue ribbon on the back. She usually wears white socks and black cross-strap Mary Jane shoes.

Sailor Moon’s original fuku consists of a white leotard with a blue collar that has three stripes on it, white gloves, light yellow shoulder pads, and a blue skirt, along with a red bow on the chest and at the back. She also wore a pair of red knee-high boots with a white border at the triangular top and crescent moons, gold earrings consisting of a stars with a crescent moon beneath, white-bordered red circular hairpieces (one on each odango), feather barrettes in her hair, and a choker with a golden crescent moon on it with a clip that is similar to her transformation brooch attached to it. Her brooch is worn on the middle of her chest bow, along with a mask that disappeared in Act 16.

Her tiara has changed a few times in the manga; at first it was a golden tiara with a red gem in its center. It later disappeared after she threw it at Jadeite in Act 3. A new one appeared in Act 4 which looked like the old one, but the gem in the center was bigger. After she met Sailor Venus in Act 8 the tiara changed into a crescent moon with a gem in the middle.

As Super Sailor Moon, her fuku almost completely changed; she has two wing-like barrettes in her hair, her earrings are no longer dangling moons, but simply crescent moons affixed to her ears. Her choker is yellow with a red heart in the center. The stripes on her collar change from white to yellow and her shoulder pads are translucent and more wing-like in shape. The back waist bow becomes long, white and billowy with a yellow belt around her waist. However, the most obvious change is her skirt; it is now white with a yellow and blue border at the bottom. In the manga, there were more noticeable changes; her collar is blue in front and yellow in the back, the colors blended into each other over her shoulders. Instead of two different-colored stripes at the bottom of her skirt, the colors seem to blend into each other, creating a subtle transition from yellow to blue.

In this form, her fuku underwent the most radical changes; she no longer wears a tiara and instead has a gold crescent moon on her forehead, her earrings have a star at the bottom of each crescent moon. The choker is red with a dark yellowish orange heart and a gold crescent moon under it while wearing the same white wing barrettes in her hair. The collar itself is like her old one, but is dark blue with two gold stripes and in place of her shoulder pads are short solid pink bubble-like sleeves with a red band at the end. In the place of her front bow is a gold heart with a crescent moon at the bottom, with what appears to be four angel wings coming out of it. Her gloves are the same as before, but with a red v-shape border along with a golden star. Her skirt is attached to her top in a red v-shape with a crescent in the center of the v along with three layers on it; the top layer is yellow, the middle layer is red and the bottom layer is blue. Her back bow is replaced with a huge set of angel wings and two very long, thin red ribbons trailing down from them. Her boots are now knee length with v-shape borders with a crescent moon on them.

Main Page: Neo-Queen Serenity
Neo-Queen Serenity is Usagi Tsukino’s future self; she is the Queen of Crystal Tokyo and of the Earth, she has been shown to have strong powers. Eternal Sailor Moon is closest to this form.

In the beginning, Usagi is seen to be a cheerful, immature girl. She cries easily and is often overtaken with emotion. She also displays an unwavering hope and sees good in her enemies that others may not.

Her attacks have moonlight, love, healing and purification attributes, as a reflection of her tendency to not fight. 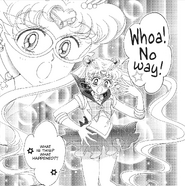 Sailor Moon after transforming for the first time in Act 1.

Sailor Moon introduces herself for the first time in Act 1.

Sailor Moon happy about the fact that Ami is one of her allies.

A colored version of a page from Act 8 of the second re-release.

Chibiusa telling Tuxedo Mask and Sailor Moon that she is their daughter in Act 20. 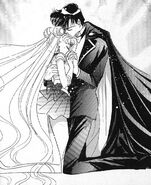 Sailor Moon and Tuxedo Mask embracing.
Add a photo to this gallery 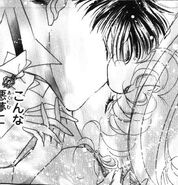 Eternal Sailor Moon.
Add a photo to this gallery

Retrieved from "https://sailormoon.fandom.com/wiki/Usagi_Tsukino_/_Sailor_Moon_(manga)?oldid=210523"
Community content is available under CC-BY-SA unless otherwise noted.