Act 1 Usagi - Sailor Moon
"I am the Pretty Guardian who Fights for Love and for Justice. I am Sailor Moon! And now in the name of the moon, I will punish you!"
— Sailor Moon's introduction

Usagi Tsukino (月野 うさぎ, Tsukino Usagi) is the Sailor Guardian of love and justice, Sailor Moon (セーラームーン, Seeraa Muun). Originally from a prosperous civilization on the Moon known as the Moon Kingdom, she was reborn on Earth and re-awoke as the leader of the Sailor Senshi.

Usagi has blue eyes and long blonde hair that she wears in odango. She has porcelain skin and a slim figure. She is the shortest of the Senshi.

The outfit that Usagi usually wears is a blue middle-school sailor uniform. The uniform has a blue sailor collar with three white stripes. She has a red ribbon on the front of her uniform, which she ties her magical brooch to. She has a white blouse with blue sleeve-cuffs that have three white stripes, just like the collar.

In the summer, she wears a white, short-sleeved blouse with puffed sleeves. She has a blue pleated skirt with a blue ribbon on the back. She usually wears white socks and black cross-strap Mary Jane shoes.

Sailor Moon’s standard uniform consists of a white chest-armored leotard with a blue sailor collar that has three white stripes on it, white gloves with three red arm fittings that reach just below her elbows, white shoulder pads, a blue skirt with a puffy white belt sat above it, along with a red bow on the chest and at the back. She also sports a pair of red short heeled knee-high boots with a white border at the triangular top that has golden crescent moons, earrings consisting of grey studs with golden stars and golden crescent moons beneath, white-bordered red circular hairpieces (one on each odango), feather barrettes in her hair, and a red choker with a golden crescent moon on it and a clip that is similar to her transformation brooch attached to it. Her brooch is worn in the middle of her chest bow, and she wore a mask that disappeared after Act 16.

When she gains Moon Cosmic Power, Make Up, her choker becomes red with a yellow heart at the center.


Her tiara underwent a few changes; at first, it was a golden tiara with a red oval-shaped gem at its center. It later disappeared after she threw it at Jadeite in Act 3. A new one appeared in Act 4 which looked like the old one, but the gem in the center was larger, and the tiara itself had a more intricate design. After she met Sailor Venus in Act 8, her tiara changed into the shape of a crescent moon with a red gem in the center, and after awakening as Princess Serenity in Act 9, the tiara shattered and was replaced with the mark of a singular crescent moon; the tiara eventually reverted to its original form with the commencement of the Black Moon arc.

As Super Sailor Moon, her uniform underwent many changes; her earrings are now singular crescent moons affixed to her ears, her choker is yellow with a pink heart in the center, the stripes on her collar change from white to golden, and her shoulder pads are white, translucent, and more wing-like in shape. Her back waist bow becomes white, long, translucent, and billowy. Her collar is blue in the front and yellow in the back, the colors blending into each other over her shoulders. Her skirt is now white with a blue and yellow border at the bottom; the colors blend into each other similar to how they do on her collar. The red gem on her tiara is replaced with a gold crescent moon, a puffy golden belt sits above her usual white belt, and a second Cosmic Heart Compact is attached to the center of her belt.

When Usagi became Eternal Sailor Moon, her uniform underwent the most radical changes; she no longer wears a tiara and instead has a golden crescent moon on her forehead, her leotard no longer has chest armor, her earrings have a golden star attached beneath each crescent moon, and her choker is red and v-shaped with a pink heart at the center and a golden crescent moon beneath it. The collar itself is like her original one, but it is a darker shade of blue with three golden stripes. In the place of her shoulder pads are pink bubble-like sleeves with two red fittings at the ends; they have somewhat of a translucent aspect to them. In the area where her chest bow was located is a pair of white angel wings with a pink heart that has a golden crescent moon attached to it sitting at its center. Her gloves now have red, v-shaped wristbands with golden crescent moons on them, the fittings at the ends of the gloves have feather barrettes attached to them similar to the ones in her hair, and the gloves themselves are now extended to reach up to her upper arms. Her belt is now comprised of two ribbons (the one on top is yellow and the one beneath it is red) clipped together by a golden crescent moon; the bottom ribbon extends past her skirt, mimicking the flowing effect that her previous back bow had. Her back bow is replaced with a set of large white angel wings, her skirt is now composed of three layers (the top layer is yellow, the middle layer is red, the bottom layer is blue), and her boots are now white and knee-length with a slightly larger heel and red v-shaped borders that have golden crescent moons on them.

Neo-Queen Serenity is Usagi Tsukino’s future self; she is the Queen of Crystal Tokyo and of the Earth, she has been shown to have strong powers. Eternal Sailor Moon is closest to this form.

In the beginning, Usagi is seen to be a cheerful, immature girl. She cries easily and is often overtaken with emotion. She also displays an unwavering hope and sees good in her enemies that others may not. Usagi has a pure heart and is always there for everyone. She can be jealous at times, especially over Mamoru, but overall is a kind, strong, courageous girl. She stands up for what is right and believes everyone deserves love.

Her attacks have moonlight, love, healing and purification attributes, as a reflection of her tendency to not fight. 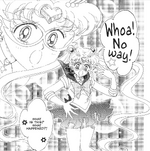 Sailor Moon after transforming for the first time in Act 1.

Sailor Moon introduces herself for the first time in Act 1.

Sailor Moon happy about the fact that Ami is one of her allies.

A colored version of a page from Act 8 of the second re-release.

Usagi sneaking up on Mamoru.

King Endymion telling Tuxedo Mask and Sailor Moon that she is their daughter in Act 20.

Usagi looking at Galaxia for the first time.

Asking Ikuko to take care of the cats.

Sailor Moon and Tuxedo Mask on the manga cover, volume 2

The inner senshi on the manga cover, volume 3

The inner senshi on the manga cover, volume 4

The inner senshi and Sailor Pluto on the manga cover, volume 6

Usagi on the manga cover, volume 8

The sailor senshi on the manga cover, volume 9

Super Sailor Moon and Luna on the manga cover, volume 11

Usagi and Mamoru on the manga cover, volume 12

Usagi on the manga cover, volume 15

Usagi on the manga cover, volume 18

The Sailor Senshi on the Kanzeban manga cover, volume 10

The Sailor Senshi on the Bunkoban manga cover, volume 10 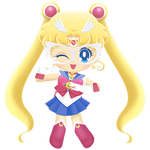