Miyuu Sawai
"I am the Pretty Guardian Who fights for love and Justice. I'm Sailor Moon. In the Name of the Moon, I'll punish you"
— Sailor Moon's stock introduction.

Usagi Tsukino (月野 うさぎ, Tsukino Usagi) is the Sailor Guardian of love and justice, Sailor Moon (セーラームーン, Seeraa muun). Originally from a prosperous civilization on the Moon known as the Moon Kingdom, she was reborn on Earth and re-awoke as the leader of the Sailor Guardians.

Usagi Tsukino has black hair tied in pigtails (although they are much shorter than her iconic blonde pigtails from the anime.)

She retains her manga and anime appearance except it has the bows are pink instead of red and she has the Heart Moon Brooch.

She has a tendency to whine. She also tends to become angry easily, particularly towards Mamoru Chiba. She seems to be more serious, and is a competent fighter. She enjoys activities such as knitting, karaoke, and going to amusement parks. She also appears to be more considerate, trying to take into account other's feelings regarding various situations (such as Mamoru's relationship with Hina).

Usagi was the oldest of two siblings and lived with her parents, Kenji and Ikuko Tsukino, and her younger brother, Shingo Tsukino. She lived an average life with her friends, including her best friend Naru.

While running to school, a plush cat falls from the sky and lands on her head. She puts the cat on a rail and continues to run to school. It stands up and observes her afterward.

Later when Usagi is home from school, she goes to bed to take a nap but finds the plush cat waiting for her. The plush cat moves and talks to her, leaving Usagi shocked and scared. It introduces itself as Luna and tells her she is a Sailor Senshi. It informers her that she must destroy a great evil, that can only be destroyed by a princess. Usagi thinks it's all a dream and goes back to bed. Luna then leaves behind a cellphone and tells her to avoid the jewelry show at OSA-P, and leaves.

After waking up Usagi goes shopping. While shopping, she gets the feeling that Naru is in danger and goes to the jewelry show. Luna sees her again and gives her the Heart Moon Brooch. Luna and Usagi sneak into the jewelry show when Luna tells her to take a picture of one of the models. Using the cellphone, Usagi takes a secret snap. She is then instantly disguised as the model. Afterwar, she enters the show through the back entrance to the hall.

The show finishes and Naru's mother comes on stage to steal energy from everyone there. Usagi appears and tells her to stop. However, Naru's mother -who was a youma in disguise- starts to attack her. Luna tells Usagi to transform using the phrase "Moon Prism Power, Make Up!" Usagi follows her orders and transforms into Sailor Moon for the first time. 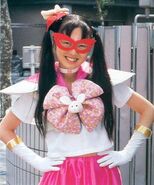 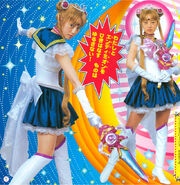 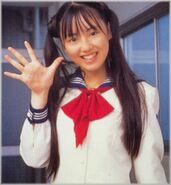