Start a Wiki
"I am the Pretty Guardian who fights for love and for justice! Sailor Moon! In the name of the Moon, I'll punish you!"
— Sailor Moon's stock introduction

Usagi Tsukino (月野 うさぎ, Tsukino Usagi) is the guardian of love and justice, Sailor Moon (セーラームーン, Seeraa Muun). Originally from a prosperous civilization on the Moon known as the Moon Kingdom, she was reborn on Earth and re-awoke as the leader of the Sailor Senshi.

Usagi has blue eyes and long golden hair that she wears in odango.

The outfit that Usagi usually wears is a light blue middle school uniform (which later became her iconic everyday outfit), which has a blue sailor collar with two white stripes. She has a red ribbon on the front of her uniform, which she ties her magical locket to. She has a white school top with blue sleeves that have white stripes on, like the collar. In the summer, she wears a white top with short puffy sleeves. She has a blue pleated skirt with a blue ribbon on the back. She usually wears white socks and black cross-strap Mary Jane shoes.

Sailor Moon’s original uniform consists of a white leotard with a blue-collar that has three stripes on it, white gloves, light yellow shoulder pads, and a blue skirt, along with a red bow on the chest and at the back. She also wore a pair of red knee-high boots with a white border at the triangular top and crescent moons, gold earrings consisting of stars with a crescent moon beneath, white-bordered red circular hairpieces (one on each odango), feather barrettes in her hair, and a choker with a golden crescent moon on it with a clip that is similar to her transformation brooch attached to it. Her brooch is worn in the middle of her chest bow, along with a mask that disappeared in Act 16.

Her tiara has changed a few times as it did in the manga; at first, it was a golden tiara with a red gem in its center. It later disappeared after she threw it at Jadeite in Act 3. A new one appeared in Act 4 which looked like the old one, but the gem in the center was bigger. After she met Sailor Venus in Act 8, the tiara changed into a crescent moon with a gem in the middle.

As Super Sailor Moon, her uniform almost completely changed; she has two wing-like barrettes in her hair, her earrings are no longer dangling moons, but simply crescent moons affixed to her ears. Her choker is yellow with a red heart in the center. The stripes on her collar change from white to yellow and her shoulder pads are translucent and more wing-like in shape. The back waist bow becomes long, white and billowy with a yellow belt around her waist. However, the most obvious change is her skirt; it is now white with a yellow and blue border at the bottom. In the manga, there were more noticeable changes; her collar is blue in front and yellow in the back, the colors blended into each other over her shoulders. Instead of two different-colored stripes at the bottom of her skirt, the colors seem to blend into each other, creating a subtle transition from yellow to blue.

Main Page: Neo-Queen Serenity
Neo-Queen Serenity is Usagi Tsukino’s future self; she is the Queen of Crystal Tokyo and the Earth, she has been shown to have strong powers. Eternal Sailor Moon is closest to this form.

Usagi's is very much a crybaby. She is also considered lazy, clumsy, as well as an academic-underachiever. She was also a terrible cook, as shown several times during the series. She was also shown to be easily made jealous and possessive of Mamoru.

However, it was shown that she cared very deeply for her friends and family. She is very trusting, and believes that everyone has a better true nature; this could be seen as both a character strength and a character flaw at times. She did not believe in killing humans, even when they had been transformed into vicious monsters, and always sought ways to heal them instead.

Throughout the series, Usagi matured a great deal although she was still prone to some childish behavior and bouts of silliness; she became a capable young woman.

In the 1st episode, 14-year-old Usagi is first seen sound asleep and dreaming of a princess and a prince. Her slumber is disturbed, however, as she is woken up by an alarm clock.

She realizes that she is late and hurries to get ready and leave. After leaving her home, she hurries to school and accidentally steps on a black cat. She picks it up and peels off the band-aids on its forehead. Usagi stares at the cat until she hears the school bell and leaves.

At the beginning of the 2nd season, Usagi enjoys her first real date with Mamoru but is pushed aside by the collision of a young girl with bubblegum pink hair who "kisses" her boyfriend instead.

She is even more shocked when the girl introduces herself as "Usagi" and demands that she hand over the Silver Crystal she has in her possession. Before she can get any more answers out of her, the girl runs off. In the end, she later finds that the girl is Chibiusa and she is from the future to try to save her mother.

In the beginning, Usagi meets Haruka Tenou and sees Michiru Kaiou together with Mamoru. When numerous attacks are leading to the Mugen Academy, she later learns of the Outer Sailor Guardians' different duties. She aids all Sailor Guardians to defeat the enemy.

Usagi can transform into a "Sailor Guardian" by wearing a special device (usually a brooch) and shouting a special command that activates the device.

Sailor Moon standing along with Luna in the night. 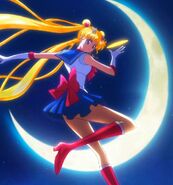 Usagi with Luna in the opening sequence

Usagi receiving her brooch from Luna

Usagi disguises herself as a nurse in episode 2

Usagi in her stewardess disguise in episode 3

Rei, Usagi and Ami in episode 4.

Makoto, Usagi, and Ami in episode 6 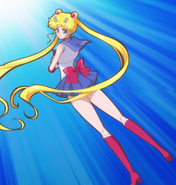 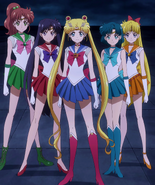 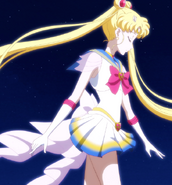 Sailor Moon holding the Silver Crystal in a key image.

Sailor Moon in the opening

The Inner Senshi and Sailor Chibi Moon on the official poster of the second anime arc.

A picture of Sailor Moon on an advertisement for the MOON PRIDE CD.

Sailor Moon on the first cover of the Blu-ray DVD.

The Inner Senshi in their civilian forms.

A promo for aniON station
Add a photo to this gallery

Retrieved from "https://sailormoon.fandom.com/wiki/Usagi_Tsukino_/_Sailor_Moon_(Crystal)?oldid=231317"
Community content is available under CC-BY-SA unless otherwise noted.