Eternal Sailor Chibi Chibi finally reveals herself as the long-lost Light of Hope, Chaos itself gains complete control over Galaxia's mind and body. Princess Serenity is urged by The Light of Hope herself to finish off the cosmic entity of pure evil with the mystical sword of sealing. However, the Princess of the Moon is reluctant to do so, as she believes that Galaxia's good heart can still be saved.

It all comes down to this one final showdown between light and dark, good and evil in the conclusion to the Sailor Moon anime. After being redeemed, Galaxia leaves, Usagi feels she's alone forever, but then the nine Super Sailor Senshi are returned to existence, and so are Mamoru and Kakyuu.

The bright pink light emanating from Sailor Chibi Chibi continues to spread waves of positive energy all around. Galaxia realizes that it is indeed the power that is great enough to challenge and defeat her. Usagi sees the shadowed form of a tall woman with long pigtails, telling her that she is the Light of Hope itself and that she has been waiting for someone to accept her shining light and takes on the form of a pink butterfly. Usagi embraces it while being covered in pink ribbons are hanging loose on her body and becomes Princess Serenity. The voice pleads that she must battle and defeat Galaxia with the mystical sword of sealing and end the war once and for all. Usagi is hesitant, but Galaxia suddenly lashes out, causing her to fall with the sword. The female voice insists that she use the sword to defeat Galaxia, that is no time for hesitation. Princess Serenity grabs hold of the mystic sword and sprouts angel wings on her back to remain airborne as Galaxia falls to the ground. The corrupted Sailor Guardian then realizes that Usagi is intending to seal her once again with the sword's power, but claims that she cannot be defeated by such power. It is then that Galaxia undergoes a sinister transformation: Her uniform changes from gold to black, her golden orange, and red hair becomes dark red and grows devil wings. She attacks Princess Serenity with a dark sword of her own, stating that she will control the entire Milky Way Galaxy in the name of Chaos. Usagi begs her to stop, but the voice reveals that she is no longer Sailor Galaxia, but has been entirely taken over by Chaos itself. Also that when she, as the real Sailor Galaxia, had sealed Chaos into herself; she gradually became corrupted by the evil force. She then made a wish on her own star seed, sending it away to the farthest reaches of the galaxy until it had reached Eternal Sailor Moon, who realizes that it was, in fact, Chibi Chibi. In her own subconscious mind, the spirit of the one true Galaxia pleads for Princess Serenity to use the sword of sealing's mystical powers to terminate Chaos and restore peace and harmony to the Milky Way Galaxy once again.

The possessed Galaxia continues battling Princess Serenity, who remains reluctant to utilize the sealing sword's power for fear of hurting her. In a panic, she manages to wound Galaxia when their two blades clash. Chaos Galaxia uses her own sword of darkness to shatter the sword of sealing into pieces; much to the horror of Princess Serenity. The fragmented sword turns back into Eternal Sailor Chibi Chibi, who is unconscious. She hugs Chibi Chibi closer and apologizes for failing to protect her as she fades away. Galaxia boasts how Sailor Moon has discarded her pride as a Sailor Senshi. Usagi says otherwise; if a Sailor Senshi's pride means hurting one another, then it is not what she wants, as she believes that fighting is not the only way to settle things. Her white gown as the Princess of the Moon vanishes, leaving pink ribbons around her once again and Serenity becomes nude while retaining the crescent moon on her forehead and white wings on her back.

Chaos Galaxia wonders whether Serenity has finally given up; to which she replies that she has not because she loves this world where she had met everyone she cares about. Serenity, too, believes that Galaxia does indeed know how wonderful the world really is. Incensed, Galaxia attacks and knocks her back. Galaxia then says that the world cannot be defended by one who refuses to fight and that all of her dear friends' have vanished because of her weaknesses. Serenity recalls what the Starlights had told her: that her friends' will always be by her side; no matter what, and that they would only truly be gone if she gave up. With her resolve now strengthened, Serenity taps into the full powers of the Silver Crystal at the center of her chest and unleashes its intensely powerful positive energy all across the world and toward Galaxia. She retaliates by unleashing a wave of pure darkness.

Then, someone saying that she is the real Galaxia appears and touches Serenity's hands, releasing the Star Seeds. Chaos tries to attack, but the blade is destroyed. As Serenity and Galaxia meet their hands finally heals Galaxia from the powers of the Silver Crystal, Chaos leaves her body as Galaxia's armor, helmet and boots have been shattered into pieces and her long golden orange and red hair finally flows freely and she is also nude like Serenity. Galaxia thanks Serenity for lighting the galaxy and leaves to return the Star Seeds to their rightful owners.

Serenity begins to cry in her loneliness, until the eight Super Sailor Senshi are restored before her, delighting her. Mamoru is then revived as Prince Endymion and he tells a joyous, tearful Serenity that Chibi Chibi guided him to her. She runs to hug her beloved man, who assures that there is no need to cry as it was all over. Chibi Chibi rises and thanks Serenity and leaves for parts unknown in the cosmos. The Sailor Starlights watch as Princess Kakyuu is brought back, and shed joyful tears. Sailor Star Fighter looks up to where Serenity and the others are and expresses her gratitude and the Light of Hope is now on everyone's mind.

After the incident, Seiya finally decided to say farewell to Usagi and her friends after assisting her to find her missing boyfriend back and he tells Mamoru to take care of Usagi. Both Taiki and Yaten are also making fun of Seiya because of Usagi as he bids farewell to everyone before he, Taiki and Yaten transform to their Sailor Starlights form and reunite with Princess Kakyu to leave Earth in a multiple of sparkles. At night, Haruka, Michiru, Setsuna, and Hotaru watch the stars and the sparkles are revealed to be the Sailor Starlights who flies away. The last scene shows the romantic relationship between Usagi and Mamoru as Usagi narrates about herself and as Sailor Moon as both are seen kissing passionately in the night of the full moon. 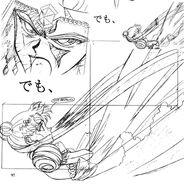 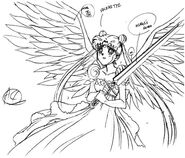 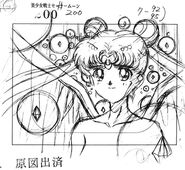 Uranus' left stripe missing
Add a photo to this gallery

Usagi's body as seen in the Korean dub

Retrieved from "https://sailormoon.fandom.com/wiki/Usagi%27s_Love:_The_Moonlight_Illuminates_the_Galaxy?oldid=228999"
Community content is available under CC-BY-SA unless otherwise noted.