Act 1 Usagi - Sailor Moon
The "Transformation Brooch" is the very 1st magical item that Usagi Tsukino used to transform into her standard Sailor form as Sailor Moon. Its transformation phrase is Moon Prism Power, Make Up.

It was given to Usagi by Luna in episode 1 of the anime and Act 1 of the manga and crystal. Luna bribed her into transforming into Sailor Moon (tricked her in the manga and Crystal) to prove to Usagi that she had a destiny as a Sailor Guardian. Once she obtained it, Usagi began wearing the brooch in the center of the bow on the front of her school uniform when she was in civilian form.

The brooch was broken in episode 51 of the anime and Act 14 of the manga and Crystal but received the Crystal Star.

It is a round golden brooch with a crescent moon as a decoration and a gold star in the middle with four smaller circles, one on each quarter, that represents each of the Inner Sailor Senshi that fight alongside her; Red for Sailor Mars, Blue for Sailor Mercury, Green for Sailor Jupiter and Orange for Sailor Venus.

The brooch destroyed in the manga 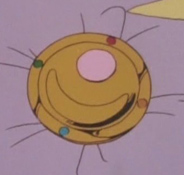