Member of the Amazon Trio

Finding Pegasus at any cost

Being stopped by the Super Sailor Guardians

Tiger's Eye is a member of the Dead Moon Circus and is part of the Amazon Trio.

Tiger's Eye's original appearance is a normal tiger. In his human appearance, he had long orange hair with a full fringe, with elfin ears, has red and blue marks on each side, blue eyes and wears a red headband. He also wore silver square-shaped earrings and was accessorized with a gold and white pearl necklace. He wears a white long-sleeved skin-tight shirt that reaches his midriff as the sleeves reach through his hands similar to gloves and with two black laces in each side of his shoulders, black trunks with matching orange and black striped tights and black boots. He also wields a long brown whip.

In his disguised human appearance, Tiger's Eye had human ears and his primary casual outfit is a white tuxedo suit with a purple bow tie. Before he victimizes younger women he had encountered, he wore various casual disguises.

Tiger's Eye was originally a tiger, turned into a humanlike form by Zirconia using a magic orb.

Tiger's Eye often targeted younger girls that he found attractive, often making them fall in love with him before he revealed his true intentions and extracted their dream mirrors. Whenever the Sailor Senshi attacked him, he would send a Lemures after them. Like his targets, the Lemures he sent were always female. He was the one who took the job most frequently.

At one point, Tiger's Eye tried to trap Pegasus using a cage set up by Hawk's Eye, but this failed, as Pegasus went through the cage-like an optical illusion. At another point, he sent a Lemure named Hebihanabiko into Pegasus to enter the dreams of the one whose dreams he was hiding inside, which turned out to be Chibiusa. Fortunately, Tiger's Eye left before he could see Chibiusa fall asleep as a result. However, this plan failed, and Hebihanabiko was destroyed.

Four of Tiger's Eye's targets were Rei, Minako, Ami, and Makoto. He and Hawk's Eye competed over who got to see into Minako's dreams, but eventually, they both did. While going after Makoto, Tiger's Eye left Fish Eye to deal with the Sailor Senshi when they arrived to stop him.

Soon, Zirconia revealed to them that they were originally a tiger, a hawk, and a fish and that they had a queen, Queen Nehellenia. After Zirconia thought (from Fish Eye saying he knew who the holder of Pegasus was) that it was Usagi's dreams who Pegasus was hiding inside, she sent Hawk's Eye after Usagi. Fish Eye attempted to stop him so Tiger's Eye went after him and held him back. He and Hawk's Eye soon found out from Fish Eye that Usagi was Sailor Moon. Then, Mr. Magic Pierrot, a Remless sent by Zirconia (who was under her orders to eliminate the Amazon Trio) attacked them. After Mr. Magic Pierrot killed Hawk's Eye, Tiger's Eye and Fish Eye attacked him, but he countered their attacks, turning Tiger's Eye's whip into a snake. They decided that the only way to beat him and avenge Hawk's Eye's death (and possibly obtain true human forms) was to give up the power that made them human to restore Serena's dream mirror (which Mr. Magic Pierrot had destroyed). Once they did this, the orb that transformed them was shattered, killing Tiger's Eye and Fish Eye (though they survived for a while, and died after Mr. Magic Pierrot was destroyed). After his death, he was turned back into a tiger. Pegasus restored the three of them to life and returned them to human forms, giving them their own dream mirrors. Tiger's Eye, along with Hawk's Eye and Fish Eye, vanished with Pegasus into a crystal forest in Pegasus' dream world, Elysion.

Tiger's Eye has the ability to pull out someone's Dream Mirror and look into someone's dreams, teleport through a hoop of fire, summon Lemures, and use a whip in order to attack the Super Sailor Senshi. He can also throw knives in order to pin someone to the ground, and in episode 129, he snapped his fingers and was able to make a vine appear from the ground in order to hold down Reika Nishimura.

Tiger's Eye in his most common disguise 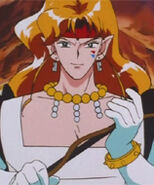 Retrieved from "https://sailormoon.fandom.com/wiki/Tiger%27s_Eye_(anime)?oldid=239773"
Community content is available under CC-BY-SA unless otherwise noted.