Tiger's Eye is a member of the Amazon Trio.

He retains the same appearance as his manga and anime counterpart.

In Sailor Moon SuperS - Yume Senshi - Ai - Eien ni... and its revision, his personality was very similar to the one in the anime, in that he was somewhat obsessed with younger women. In Shin Densetsu Kourin, however, Akihito Mimatsu's portrayal of Tiger's Eye was more effeminate, similar to the manga version. In this musical, Tiger's Eye was referred to as an "okama" (御釜; cross-dresser/gay man) by several characters, including Chibi Chibi. He was also shown to be willing to kiss Fish Eye when Hawk's Eye commanded them to (though Fish Eye pushed Tiger's Eye away), and he had a love of gossip. 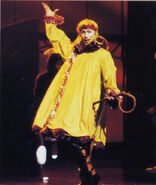 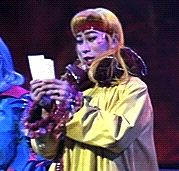 Retrieved from "https://sailormoon.fandom.com/wiki/Tiger%27s_Eye_(Sera_Myu)?oldid=218873"
Community content is available under CC-BY-SA unless otherwise noted.