An Invasion from Another Dimension: Mystery of Mugen Academy

Tellu is the 3rd member of the Witches 5 and is the 3rd witch to collect Pure Heart Crystals and battle the Sailor Guardians.

Tellu retains her same appearance as in the manga.

In the anime, Tellu shadowed like most of the others, beat Mimete at Twister. In her first somewhat unshadowed episode, Professor Tomoe told Tellu that it was her turn to steal Pure Hearts. Mimete overheard this and, using a voice changer to sound like Professor Tomoe, told her that the project was canceled (so she could go instead), but Tellu was not fooled by this trick. Tellu spied on Mimete as she attacked a physicist, and when she used the Witches Electric Warp to increase her size and power, Tellu pulled the plug on her trapping Mimete in the screen forever.

Tellu only lasted one episode against the Sailor Guardians. She used several plants called Telluns to steal Pure Heart Crystals from people. Once removed, she captured the crystals in a star-shaped object. Sailor Moon, Sailor Chibi Moon, and Sailor Pluto fought her off. As she was attacking Sailor Pluto, Tuxedo Mask arrived, and Sailor Moon transformed into Super Sailor Moon and destroyed all the plants. But Tellu still had one plant left, and injected it with a needle, transforming it into Hyper Tellun, a gigantic plant monster who eats Pure Heart Crystals. However, before she could leave, Tuxedo Mask used a rose to break the container holding Crystal Hearts, surrounding her with Crystal Hearts and causing the Hyper Tellun to turn on Tellu (thinking she had a Crystal Heart), wrapping her in its vines. Tellu wrapped her vines around Hyper Tellun to electrocute her, causing it to self-destruct, killing Tellu with it.

After her death, all that remained was her assignment book, which gave the Sailor Guardians the location of the headquarters of the Death Busters.

Official Profile of Tellu in disguise. Art by Ikuko Itoh. 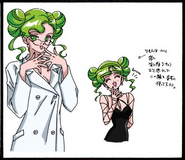 Official Art of Tellu, also in her white coat. Art by Ikuko Itoh.

Tellu in the shadows, killing Mimete