Tellu is one of the members of Witches 5 and one of the loyal minions of the Death Busters. Tellu is the fourth of the Witches 5. She is level 404.

She retains her appearance from the manga and 90s anime.

Kaolinite appoints her to find hosties for Master Pharaoh 90, which she accepts and goes under her disguise as Lulu Teruno, the head of the Physical Education class and Botanical Garden at Mugen Gakuen. She uses her powers to create plants, Telluns, that will suck out the souls from people when they bloom. After Makoto buys one and is merely almost attacked by it, the Inner Sailor Senshi goes to the Botanical Garden in Mugen Gakuen to investigate. They face Tellu there and attacks them with Mandragora Buster using the Tellun Flower. Sailor Moon attempts to finish her off with Moon Spiral Heart Attack but absorbs it. Then, wanting to help, Sailor Chibi Moon turns Luna-P into the Pink Moon Rod and attacks Tellu with Pink Sugar Heart Attack. Tellu eventually absorbs it as well, and to defeat the Sailor Senshi, she turns into a horrifying Daimon. She attempts to make a final blow against the Sailor Senshi until the newly awakened Sailor Pluto arrives and kills Tellu with Dead Scream.

Tellu is briefly resurrected, along with the other witches, by Kaolinite. Sailor Jupiter makes her way to the botanical gardens, where she meets Tellu in her Ruru Teruno guise. Tellu then walks to her and claims that they don't need to fight and they need to look at the flowers. Tellu hypnotizes Sailor Jupiter with her plants, and Makoto collapses. In the end, the Outer Senshi were able to break into Mugen Academy with Sailor Uranus' Space Sword Blaster, destroy the Witches 5 with Sailor Neptune's Submarine Reflection, and free Sailor Moon and the Inner Senshi with Sailor Pluto's Chronos Typhoon.

Like the other members of the Witches 5, she can fly and change her clothes instantly. Using Telluns, she can suck to the energy of her victims. She is capable of blocking the attacks of the Senshi. She can unleash an attack call Mandragora Buster. She can transform into a monstrous form, allowing her to use vines to attack multiple enemies. 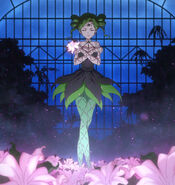 Retrieved from "https://sailormoon.fandom.com/wiki/Tellu_(Crystal)?oldid=239288"
Community content is available under CC-BY-SA unless otherwise noted.