The "Spiral Heart Moon Rod" is the 3rd mystical weapon Sailor Moon uses in her 3rd Sailor form in the Infinity arc and the 3rd season of the anime; including in Sailor Moon S: The Movie.

In the anime, it was a weapon born from the love of Usagi and Mamoru, while in the manga, Neo-Queen Serenity gave it to Sailor Moon herself, along with her new brooch. The item was used to perform Moon Spiral Heart Attack and Rainbow Moon Heartache. In the SuperS season, it was upgraded to the Moon Kaleido Scope by Pegasus.

in the second movie of the anime, Sailor Moon used the Spiral Heart Moon Rod twice; the first was to destroy the Snow Dancers that froze the city and its people. The second and final attempt was when she evoked into Super Sailor Moon and used Rainbow Moon Heartache against Kaguya, the Snow Queen, which failed to defeat her.

Chibiusa gives this new scepter to Usagi, which is a gift from Neo-Queen Serenity, in gratitude for saving Crystal Tokyo. 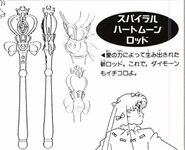 Retrieved from "https://sailormoon.fandom.com/wiki/Spiral_Heart_Moon_Rod?oldid=223544"
Community content is available under CC-BY-SA unless otherwise noted.