The Spectre Sisters were a quartet of sisters who worked for and obeyed the commands of Rubeus and were members of the Black Moon Clan. Their names are Koan, Berthier, Calaveras, and Petz.

Like the members of the Black Moon Clan, they all had upside-down dark crescent moon symbols on their foreheads and dark crystal earrings.

The Spectre Sisters were sent to capture a child known as "Rabbit" (Chibiusa) and to gather people to hypnotize them into working for the Black Moon, or infiltrate society of the present day.

The first sent was Koan, who posed at Koan Kurozuki as a student at Rei Hino's school. She captured Sailor Mars but was destroyed by Sailor Moon's Moon Princess Halation.

Berthier was sent next and captured Sailor Mercury, but was destroyed by Moon Princess Halation.

Petz was sent out next, and sent a virus throughout Tokyo, and captured Sailor Jupiter, but was destroyed by Sailor Moon's Moon Princess Halation.

Last was Calaveras, who tried to capture Sailor Venus while she posed as a person who could see the future, but was destroyed before she could fulfill her mission.

They usually employed Droids to help them take over the Crystal Points for Rubeus, but their plans were foiled each time by the Sailor Guardians.

The Spectre Sisters often bicker among themselves and try to impress Crimson Rubeus, trying to outdo one another and at one point, Petz was even prepared to eliminate her sisters, whom she viewed as traitors.

Eventually, around the time Rubeus decided to kick them out, each of the Spectre Sisters wished to be purified from the effects of the Malefic Black Crystal and become good people. They were healed by Sailor Moon using Moon Crystal Power. Afterwards, they ran a cosmetic shop.

Saphir discovered than Wiseman was manipulating the Black Moon Clan behind their backs and tried to warn Prince Demande. He ended up being badly injured by Wiseman, who tried to stop him. Saphir escaped to earth and was cared for by the Spectre Sisters.

Petz, Calaveras, and Koan appeared in the musical The Birth! Princess of Darkness, Black Lady and in its revision, Berthier was also present with her sisters. In this continuity, they had a group attack called "Black Vicious Crystal," performed with Esmeraude in the first musical and with only the four sisters in the revision.

Art of the sisters from Artbook II 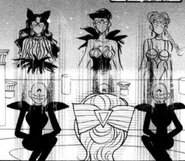 Calaveras looks over the deceased spirits of her sisters

The sisters as humans from episode 86

Promotional art of the Spectre sisters and inner senshi

Retrieved from "https://sailormoon.fandom.com/wiki/Spectre_Sisters?oldid=239582"
Community content is available under CC-BY-SA unless otherwise noted.