Start a Wiki
"Protected by Pluto, the Planet of Space-Time. I am Sailor Pluto, Guardian of Revolution."
— Sailor Pluto's stock introduction from Sailor Moon Sailor Stars

Setsuna Meiou (せつな 冥王, Setsuna Meiou) is the civilian identity and present-day incarnation of Sailor Pluto (セーラープルート, Seeraa Puruuto). She is one of the four Outer Sailor Guardians of the Solar System, as well as the guardian of the Space-Time Door, and was the 6th Sailor Senshi to be introduced in the anime. Her attacks are based around time, the underworld, space, and darkness; granted by her orb.

Setsuna: Even though her name is written in hiragana and is not inherent, Setsuna can mean "moment", relating to her powers over time, or "sorrow".

Meiou: The kanji for Mei means "dark" while the kanji for ou means "king", based on the Japanese name of the planet Pluto (冥王星 Meiohsei "Nether King Star", the given title of Pluto, the Roman god of the underworld).

Combined her name could be read as "Momentary Dark King" or "Sorrowful Dark King".

Setsuna retains the same appearance as she did in her original manga depiction. She has very long dark green hair with a green shine on front and dark red eyes. She has her hair tied in a small bun as the rest of her hair is loose and wears a red dangling earring. Her bangs are in front of her forehead only parting a bit on the left side to show a sliver of her tiara. The earrings and her brooch shine bright like the red Garnet Orb. A small round pendant is hanging under the choker.

Her primary casual appearance in Sailor Stars is the same as her college uniform as the color is maroon and her skirt is replaced by slacks.

As Sailor Pluto, her sailor uniform consisted of a white sleeveless leotard with a maroon chest bow and a bright red circular brooch affixed to it. Her stripeless sailor collar was black, she wore a gold tiara with a garnet red gem, her thick red earrings were in the shape of arrows, and she wore a black choker with a red bauble. She also wore white elbow-length gloves with black padding, her skirt was black with a maroon bow at the back, and her footwear consisted of black knee-high heeled boots with white triangular arches.

As Sailor Pluto, she guarded the Space-Time Door, and she originally could not leave her post, which left her very lonely. However, Neo-Queen Serenity allowed her to leave her post to help the other Sailor Senshi of the Outer Solar System during the events of the S season, and she was reincarnated as an adult in the present time during the Death Busters arc, where she took on the identity of Setsuna Meiou, a K.O. University student studying physics.

Setsuna dreamed of being a designer one day. She was good friends with Chibiusa and Diana and was also very close to Hotaru Tomoe after the end of the Death Busters crisis. Setsuna became part of an adoptive family with Haruka, Michiru, and Hotaru when they took up residence together.

Sailor Pluto had been the guardian of the Door of Space-Time for millennia. With three taboos she must never break: She must never leave her post, she must not allow anyone to travel through time, and she must never use her powers to disrupt the flow of time in any way. Breaking the last taboo would mean the end of her life.

Sailor Pluto's first introduction to the show is in the second season when Chibiusa communicated to her through Luna-P.

While Sailor Pluto was not seen, she spoke to Chibiusa. Later Chibiusa was afflicted by an illness that was created by a Black Moon droid, and Sailor Pluto made her appearance known to the Sailor Senshi using a hologram created by Luna-P.

She used her power to travel into Chibiusa's dream and help her. She was seen again when Chibiusa took the Sailor Senshi and Tuxedo Mask to the Space-Time Door.

Later after Chibiusa vanished Pluto opened the Time Door again and allowed the Senshi and Tuxedo Mask to travel back to the present day where Chibiusa was.

After Eudial steals the two mystic talismans from Sailor Neptune and Sailor Uranus, Pluto arrives to join the fight with Sailor Moon. She reveals that the ornament on her Garnet Rod, the Garnet Orb, is the third and last Talisman.

She uses it to summon the other Talismans away from Eudial.

As the Talismans are presented in front of the bodies of Uranus and Neptune, their Pure Heart Crystals are separated from the Talismans and are returned to the two Sailor Senshi. The trio uses all three talismans to summon the Holy Grail, which Sailor Moon gains to defeat Eudial. After the battle, Sailor Pluto joins Sailor Neptune and Sailor Uranus to search for the Messiah.

She later disappeared when using her forbidden time-stopping abilities to save Sailor Uranus and Sailor Neptune from the helicopter explosion; doing so had ended her life mission as Guardian of Time and Space. She appeared in front of Chibiusa, like an astral projection when she was looking for her hat. Sailor Pluto talked to Chibiusa about her best friend and ally, Sailor Saturn, who had heroically "died" and had her spirit/soul reborn and reincarnated as a newborn baby Hotaru.

Sailor Pluto returned with baby Hotaru and was upgraded to Crystal Power along with Sailor Uranus and Sailor Neptune. Shortly through the season, Sailor Pluto was killed by Sailor Galaxia, who took her Star Seed alongside Sailor Saturn.

She, along with all the other Super Sailor Senshi, was revived by Princess Serenity after she had turned Galaxia back into her normal self by expelling Chaos out of her body entirely. She praised Serenity on cleansing Galaxia and defeating Chaos. She watched as Serenity was happily reunited with Mamoru (who bore the attire of Prince Endymion) and the departure of Chibi Chibi.

"My Garnet Rod....you're protecting me."

Setsuna's outfit in the Sailor Moon S movie.
Add a photo to this gallery

Pluto and the Garnet Orb 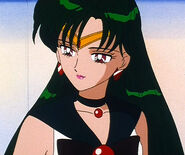 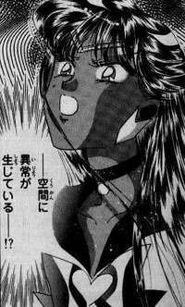 Sailor Pluto in the Sailor Moon S opening.
Add a photo to this gallery

Pluto being attacked by a Mirror Paredri

Retrieved from "https://sailormoon.fandom.com/wiki/Setsuna_Meiou_/_Sailor_Pluto_(anime)?oldid=228571"
Community content is available under CC-BY-SA unless otherwise noted.