Farewells and Encounters: The Transitioning Stars of Destiny

Seiya Kou (星野 光, Kou Seiya) is one of the members of the Three Lights idol group and is the civilian identity of Sailor Star Fighter (セーラースターファイター, Seeraa Sutaa Faitaa). She is a student at Juban Public High School and the lead singer of the Three Lights.

Seiya has blue eyes and long, hip-length raven hair that he keeps tied in a low ponytail. As the leading vocalist of the Three Lights, Seiya is commonly seen wearing a red formal suit jacket with a navy blue long-sleeved button-up shirt underneath with a yellow long tie at the collar, red formal pants, and black shoes. Seiya also wears a pair of silver moon earrings on both of his ears. He sometimes handling the red rose during concerts or as a weapon when he threw the rose on Sailor Tin Nyanko to rescue Usagi as Eternal Sailor Moon from getting her star seed.

When he studies at Azabu Juban High School, he wore a different school uniform like both Taiki and Yaten to differ from the other male students wearing standard male school uniforms.

Her sailor uniform, identical to the other Starlights, is a black two-piece outfit, consisting of a bikini-like top and hotpants. She wears knee-length boots and elbow-length gloves. She wears a golden beaded tiara, beaded belts on her waist and golden star earrings. Her secondary color is light blue. She also wears a light blue belt-like choker and belt-like straps on her upper arm.

Seiya's personality was considerably lighter than that of the other two Starlights. He was much more childlike in his attitude, with a slight prankster edge to his character, and there were brief moments when he was not thinking about his mission. He had a cheerful disposition and was much more easygoing. He was also more willing to become close to Usagi and her friends, while the other two Starlights mainly kept to themselves and originally refused to work with the Solar System Senshi at all. As mentioned by Taiki and Yaten, Seiya is also a sore loser.

Seiya is first seen walking past Mamoru and Usagi at the airport when Mamoru is departing for America. His attention is caught by Usagi, but then he walks away. He later sees Usagi at a shooting location and recognizes her when she is trying to get a good look at what's happening. He first officially meets Usagi in Episode 173 while Taiki Kou is having a shoot with an actress as Usagi did not recognize him from at the airport. When the Taiki's partner and actress turns into a Phage by Sailor Iron Mouse, the trio transforms into their Sailor Starlights form off-screen and she was the one who snaps her fingers when Eternal Sailor Moon fights off the Phage. They wanted to eliminate the Phage but Eternal Sailor Moon tells them not to hurt the Phage and that the actress is the same person which created a glowing Crescent Moon on her forehead. She manages to heal the Phage with Starlight Honeymoon Therapy Kiss. The Sailor Starlights notice her actions and act as anti-heroines towards her.

As time passes Seiya develops feelings for Usagi and discovers her identity as Sailor Moon, Seiya becomes overprotective of Usagi even to the point of being kicked out by both Taiki and Yaten for his actions. When Sailor Tin Nyanko targets Usagi for her star seed, Seiya along with Rei, Makoto, Minako, and Ami search for her. By the time Eternal Sailor Moon defends herself from being attacked, Seiya saves her by throwing a red rose and injures Sailor Tin Nyanko which causes Usagi to mistake Seiya for Tuxedo Mask. Seiya angrily tells her if she tries to attack her, he will stand and fight as he transforms into Sailor Star Fighter and unleashes her Star Serious Laser at Sailor Tin Nyanko, allowing Eternal Sailor Moon to hit her with her Silver Moon Power Kiss which it nearly hits her. After the incident when it rains, Usagi finally breaks her happy demeanor and reveals that Mamoru didn't respond to any of her calls and messages, as she does not know that her boyfriend was killed by Sailor Galaxia from the very beginning on his plane ride to America. Seiya comforts her and asks. "You've still got me...am I not good enough?". With that, he decides to find Mamoru for Usagi's sake.

The Sailor Starlights watch their confrontation between Princess Serenity and Galaxia in the remainder of the final episode and after Galaxia was healed, Sailor Star Fighter returned with the other Starlights see Kakyuu was back to life along with the Inner and Outer Sailor Guardians and watching Chibi Chibi leave and stating the Light of Hope was in everyone's mind. After the incident, Seiya finally says goodbye to Usagi after she finally found her boyfriend back and he also tells Mamoru to protect her before he transforms into Sailor Star Fighter and her with Sailor Star Healer, Sailor Star Maker, and Kakyuu to leave Earth to restore their homeworld. The Starlights were last seen by Haruka, Michiru, Setsuna, and Hotaru. 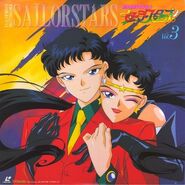 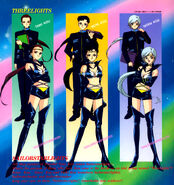 The Three Lights and the Sailor Starlights

Seiya after getting caked by ChibiChibi

Retrieved from "https://sailormoon.fandom.com/wiki/Seiya_Kou_/_Sailor_Star_Fighter_(anime)?oldid=238505"
Community content is available under CC-BY-SA unless otherwise noted.