Blue Saphir is one of the members of the Black Moon Clan.

His appearance is the same as the anime and manga. Saphir has dark blue hair that is slightly messy and violet eyes that appear to be lifeless. He wears a blue shirt with a collar, violet gloves, white pants, and white shoes. Like all members of the Black Moon Clan, he has the symbol of the Black Moon on his forehead.

He was quite similar to the manga, though he was originally native of Nemesis and desperately wanted to visit the earth because his brother told him how beautiful it was. He went under Wiseman's spell when Black Lady put earrings on his ears that were made of Evil Black Crystal material. Saphir then attacked Demande who had no choice but to kill his own brother. Demande then promised his deceased brother he would bring flowers to Nemesis because both brothers hadn't seen flowers when they were kids.

Saphir prefers to work with droids creations and maintaining Nemesis's Malefic Black Crystal Reactor, which he compared to his brother in being unpredictable. While Saphir questioned Wiseman's intentions and Demand's lack of reasoning as on the grounds that the latter's reasoning is being eroded, he only got his brother's disdain to be being by accused of wanting the power for himself. When Demand brings Usagi to Nemesis and she stumbled into the reactor room, Saphir admits that their plans were insensible and that she was guiltless yet tries to kill her on the grounds that she and the Silver Crystal are still a source of conflict. But Demand gets in the way and Demand then finds out he was killed and was a droid. Saphir then un masked Wiseman to find out he was already dead and eroded away and has become Nemesis itself. Saphir was later killed by Wiseman.

Saphir's name is a french word for Sapphire 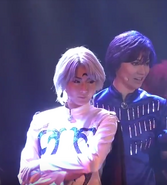 Retrieved from "https://sailormoon.fandom.com/wiki/Saphir_(Sera_Myu)?oldid=219429"
Community content is available under CC-BY-SA unless otherwise noted.