Blue Saphir is one of the members of the Black Moon Clan.

His appearance is the same as the anime and manga.

He was quite similar to the manga, though he was originally native of Nemesis and desperately wanted to visit the earth because his brother told him how beautiful it was. He went under Wiseman's spell when Black Lady put earrings on his ears that were made of Evil Black Crystal material. Saphir then attacked Demande who had no choice but to kill his own brother. Demande then promised his deceased brother he would bring flowers to Nemesis because both brothers hadn't seen flowers when they were kids. 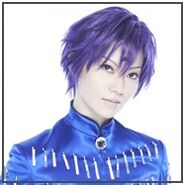 Sora Manami as Saphir
Add a photo to this gallery
Saphir.seramyu.png

Retrieved from "https://sailormoon.fandom.com/wiki/Saphir_(Sera_Myu)?oldid=210298"
Community content is available under CC-BY-SA unless otherwise noted.