Sailor Tin Nyanko is the fourth Sailor Animamate to be introduced in the manga.

Nyanko means cat, or kitten (Nyan is the Japanese equivalent of meow and ko means small). Her surname, Suzu, means "little bells", which means that her disguise name would be translated as "Little Bells Kitten".

Sailor Tin Nyanko wears a black top with a matching skirt, gloves, collar, bow, hat, and boots. She has clear golden eyes, light skin, and a black cat tail. Her headpiece has three rows of golden balls with a golden star on her forehead, her right cat ear has a silver hoop through it and two plaits are coming out of the tops of her cat ears. Her gloves and top are lined with red and she has a matching red choker, the choker and top are lined with little golden balls. Her bow and choker both have bells on them and her boots go all the way up to her skirt with straps over the exposed skin. She, like all the Animamates, has Galactica bracelets.

As Nyanko Suzu she wears the regular Juban High summer uniform with a bell on the bow. She also wears a choker with a bell on it. Her hair is a similar shape to her hat as Sailor Tiny Nyanko with the inclusion of a parted fringe. She further has a small hoop earring in her left ear.

Nyanko Suzu arrives at Juban High, claiming to be an exchange student from Libya. She immediately hung around Usagi to the point of stalking her, trying to learn everything about her. Fortunately for Usagi, not everyone was fooled by the "new student" - the Sailor Starlights, Luna, and Artemis sensed she was an alien.

After reaffirming her vow to become a real Sailor Senshi, Tin Nyanko redoubled her attack and hit Diana, who came back to the past to try to stop the fighting. Diana's moon sign was erased and she was turned into a "normal" cat, unable to speak. The same ultimately happened to Luna and Artemis, despite Sailor Moon's attempts to save them. Before Tin Nyanko could attack Sailor Moon, however, Sailor Star Fighter attacked Tin Nyanko, and she was forced to retreat.

When she goes to beg for forgiveness, she is killed by Galaxia. 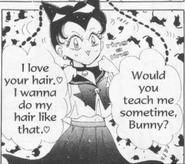