"Breaking through the darkness of night, traveling unchained across the atmosphere, the three scared shooting stars!"
— The Sailor Starlights' introduction

The "Sailor Starlights" were a group of Sailor Senshi who came to the Earth in search of their princess, Kakyuu after their home planet of Kinmoku was destroyed by Sailor Galaxia.

The Starlights consist of:

Their search for Princess Kakyuu brings them into conflict with the Sailor Senshi of Earth, specifically with the Outer Sailor Guardians, who want the Starlights to leave the planet and leave Usagi alone. The reason the Starlights, specifically Star Fighter, are so interested in Usagi is because Usagi carries the scent of Princess Kakyuu, due to an incense burner that Chibi Chibi possesses.

The Sailor Starlights are searching for Princess Kakyuu, traveling the galaxy and eventually arriving on Earth to find her. In their civilian forms, they created a band called "Three Lights", and disguised themselves as men; since the band's songs spoke about "finding their princess", this was a tactic to make their identities less obvious, as well as to gain more publicity for the band.

The Sailor Starlights are essentially the same in the anime as in the manga. One key difference, however, is that their male disguises on Earth are fully biological (i.e. they literally turn into men), and not just cross-dressing. They only become female when they take their Sailor Senshi forms.

Just like in the manga, the Starlights cross-dressed as men but were actually female.

The Sailor Starlights in the 90s anime 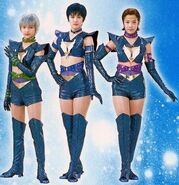 Retrieved from "https://sailormoon.fandom.com/wiki/Sailor_Starlights?oldid=232347"
Community content is available under CC-BY-SA unless otherwise noted.