The "Sailor Quartet" were 4 Sailor Guardians who were to awaken as Chibiusa's bodyguards when she took on the role of Sailor Chibi Moon. They appeared only in the manga and musicals.

They are named after four Asteroids in the Solar System. Their names were Sailor Ceres, Sailor Pallas, Sailor Juno, and Sailor Vesta. They slept in Amazon stones until they were prematurely released by Queen Nehellenia of the Dead Moon Circus. She corrupted them and turned them respectively as CereCere, PallaPalla, JunJun, and VesVes, making the Amazoness Quartet. When they started regaining their memories, Zirconia sealed them back into the stones. After Nehellenia was defeated, Neo-Queen Serenity, at Sailor Saturn's request, healed the stones, freeing the Quartet who were revealed to be Sailor Guardians.

During the Stars arc, Sailor Chibi Moon, along with her four Asteroid Sailor Guardians went back to the past to fight. When Sailor Moon jumped into the Galaxy Cauldron, Sailor Cosmos returned the Sailor Quartet to slumber to be awakened in their proper time in the 30th Century. 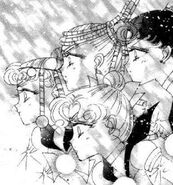 Retrieved from "https://sailormoon.fandom.com/wiki/Sailor_Quartet?oldid=228368"
Community content is available under CC-BY-SA unless otherwise noted.