Start a Wiki
Сейлор Мун is the Russian dub of Sailor Moon's first anime series that aired in Russia. The Russian title was written as one word, "Sailormoon."

The initial series run was on channel 2x2 in 1993 through 1997, consisted of the first three seasons (Classic, R, and S), with the translation by 2x2 Telemarket. As it is common is Russia, it was a voiceover, not a full lip-synced dub. All of the male voices were done by Vadim Andreev and all of the female voices, as well as the child voices, were done by Lyudmila Ilyina. The same three seasons were then re-broadcast by AST since 1996, channel TNT in 2000, and then channel Stolitsa (Now Moscow 24) in 2001 through 2002.

The season names were changed as follows:

Previews for the following episode were never shown, avant-titles were moved to right after the opening song (except for episode 89), and eyecatches were removed (as no commercial breaks were inserted into the episodes). The episode title cards were kept in Japanese. There were no subtitles, only a voiceover telling the title of the episode. In all three seasons, there were creditless openings and endings, only a voiceover naming the credits. There was no text in the ending apart from the series name, air time, and the words, "To be continued...". There were no alterations to the opening or ending credits. All openings had no lyrics, until episode 89 onward, the version with the lyrics began to air.

The third season retained its opening sequence, but the final version of the opening (the 3rd opening of the S season) was used, spoiling the appearances of the Outer Senshi, Sailor Chibi Moon, Hotaru Tomoe, and Super Sailor Moon. The ending sequence for Tuxedo Mirage was used with the song Otome no Policy until episode 110. Episode 114 was omitted from the first run on TNT, but was retained in Kazakhstan later on in the channel 31 run.

Later, starting from the year 2001, the SuperS and StarS, were added, making Russia one of the few countries to air all 200 episodes. TNT had purchased the German dub for these two seasons, which were then dubbed into Russian.

The series was also broadcasted by NTN-4, ATN, Channel 23, however, these were versions the same as from the previous years.[1]

Other things like organizations and groups were renamed as well;

This is the Japanese version and this time the script is like in the original. The only difference is the change of music. 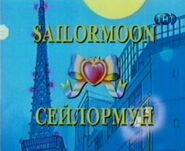 An alternate logo. It was the Russian version of the German logo.
Add a photo to this gallery
Retrieved from "https://sailormoon.fandom.com/wiki/Sailor_Moon_in_Russia?oldid=214901"
Community content is available under CC-BY-SA unless otherwise noted.