"Sailor Moon Drops" (セーラームーンドロップス, Seeraa Muun Doroppusu) is the first mobile game app of the Sailor Moon franchise. It was available for Android and iOS since the fall of 2015. In 2016, the game became available on the American iTunes app store. It has been officially shut down on March 28, 2019, in Japan and internationally.

To progress to the next plot line, Usagi has to move through steps and get through each challenge. The challenge is where the player has to match three pieces in a row for the pieces to vanish and the player to gain points, which increase if such a move causes more than one set to align. The player is given a set number of moves they are allowed to make to complete the challenge. The challenge is complete once the player gets a certain number of points. At the end of each stage, a monster appears on the final level. When confronting a monster, there will be a certain set of pieces that can deplete its HP and must be defeated within the number of moves. It also has a number set up when pieces not on the list that cause the number to decrease. When the number hits zero, it changes the list, so new set pieces are needed to damage it.

The game often runs events in which the players can play special maps to obtain new characters and items for a limited time. The obtainable characters in these events are often the main characters in their civilian forms, though characters such as Sailor V and Luna in her human form have their events as well. In addition to this, some special events can take place around holidays such as Halloween and Christmas in which the players can obtain a character in a seasonal costume, such as Haruka in a vampire costume and Usagi in a Santa outfit. Some events can also return as re-run events, giving players another chance to get the character or allowing them to earn more items if they already have the character.

Another important thing to note is that in addition to the event maps often varying depending on the character that can be won, some events also offer unique items that can't be found in other events. The item can be a wallpaper or, in the case of the Sailor V and Princess Kaguya's Lover events, an event-only episode. It's also worth noting that these items or attributes are mainly seen in seasonal events. Another type of event is the bingo event, which was recently added. This type of event is where bingo cards replace the courses. Each card consist of nine levels, all of which are randomly chosen for the player to start on. The player must get a certain amount of bingos to unlock the next bingo card. To collect the character the bingo event is about, the player must get a blackout on each card (meaning the whole card must be full bingo). 24 bingos will unlock the character to its 1-3 level; to max out the character to level 5, you must get 40 bingos. Each card can have 8 bingos in total. So far, there have only been two bingo events, Tuxedo Mask and Black Lady.

Characters playable in the game. Each of them has five levels and when leveled up the first time, they earn a Special Move that can be powered up when they are leveled up for the fourth and final time. Certain poses can also be unlocked once you level up a character and they can be viewed in your Collection.

Aside from the in-game story, Luna helps the player in tutorials and such. Also included in Luna Bonus and appears alongside Artemis in the Piece Crusher booster. Her human form is the only version of herself that is playable (event exclusive).

Antagonist in the Dark Kingdom story.

All of them appear in the Dark Kingdom story. However, they are playable in the Crown Game Center in the Japanese version of Sailor Moon Drops (Obtainable through events only). They also appear in Prince Endymion's level 5 Special Move. In the game's files, there is an image of Nephrite holding a spoon, which was originally meant for Naru's Special Move but was cut for some unknown reason.

Non-playable characters that are first seen during the Black Moon arc and map. Some of these characters are only relevant to this arc and don't appear in future ones.

Antagonist in the Black Moon story.

The antagonist in the Black Moon story. Will be a playable character in an upcoming event in the Japanese version.

Non-playable characters that are first seen during the Death Busters arc and map. Some of these characters are only relevant to this arc and don't appear in future ones.

Antagonist in the Death Busters episodes and map.

Antagonist in the Death Busters episodes.

Appears in the Death Busters episodes. However, will be playable through a planned event in the Japanese version of the game.

Antagonist of the Dead Moon episodes.

Antagonist in the Dead Moon episodes.

Appears in the Dead Moon episodes. Helios is a playable character in the game, but his pegasus form is not. However, it does appear in Chibi-Usa's (SuperS uniform) Special Attack and Super Sailor Chibi-Moon's Special Attack.

Appears in Dead Moon episodes. However, she is part of Chibi-Usa's player and cutscene models. She also has her special stages.

Non-playable characters that are first seen during the Shadow Galactica/ Sailor Stars arc and map. Some of these characters are only relevant to this arc and don't appear in future ones.

Antagonist of the Sailor Stars episodes.

Appears in the in-game story, specifically the Sailor Stars arc.

Appears in the in-game story, specifically the Sailor Stars arc. However, two of her other forms are playable, Sailor Chibi Chibi and Sailor Cosmos.

Non-playable characters that are first seen during the Lover of Princess Kaguya event. Some of these characters are only relevant to this arc and don't appear in future ones.

Antagonist of the event exclusive episode.

Appears in the Lover of Princess Kaguya event episode.

Appears in the Lover of Princess Kaguya event episode.

In both the U.S and Japan: 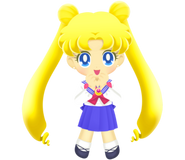 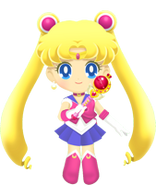 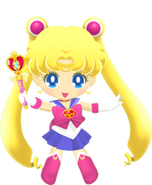 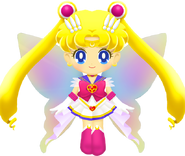 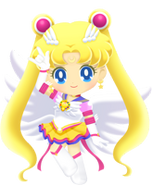 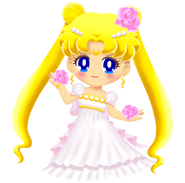 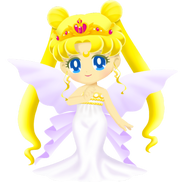 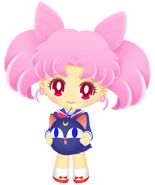 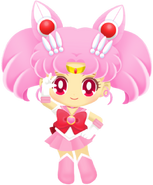 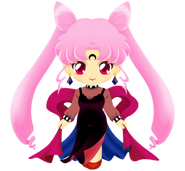 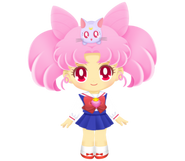 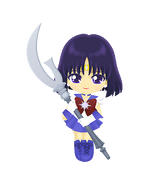 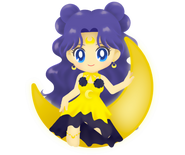 ChibiChibi (Cutscene Only, planned to be playable but was cut) 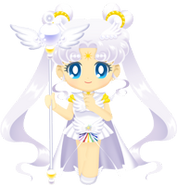 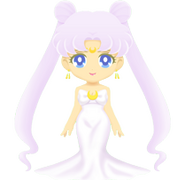 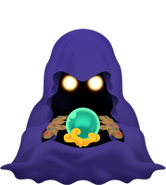 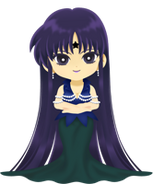 Mistress 9 (Planned to be playable but was cut) 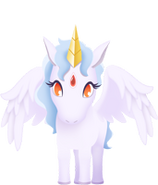 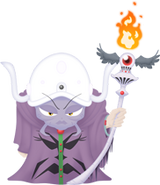 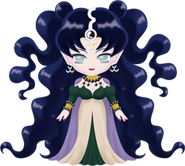 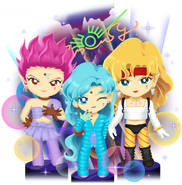 Game Over Screen for Tuxedo Mask, Prince Endymion, and Mamoru

While the event played out in the Japanese version of the game, this version is considered unused/cut as it never made its way to international versions but was planned.

Was original meant for Naru's Special Skill but was cut for some unknown reason.

The original character icon for Mistress 9 until it was replaced. However, both versions went unused as the event was cut.

The placeholder and potential final version of the character icon for Mistress 9. It reads "Not yet!" The text would have been removed when released.