Sailor Moon Wiki
Register
Don't have an account?
Sign In
Advertisement
in: Sailor Moon in Other Countries, International

Sailor Moon, was originally intended to debut in North America as a live action and animated show with a completely different story line to that of the Japanese anime franchise. It is also mistakenly known as Saban Moon.

North American animation company Toon Makers, in the early 1990s, teamed up with Power Rangers producers Renaissance Atlantic, and pitched a series to the FOX network, to make a completely different "Americanized" version of the successful Japanese franchise Sailor Moon.

The project would show both the animation work of Toon Makers, and live-action productions of Renaissance Atlantic. The project was ultimately canned, and not much is spoken or known about it, except very few storyboard arts, and a very obscure two minute promotional video from a private anime expo in the late 1990s that goes more in depth and shows generally what the project would have entailed. The promotional video is infamous online, and brought exposure to the project. Many fans incorrectly call the project "Saban Moon", as the live action scenes which were shot by Renaissance Atlantic, also do some work on Power Rangers. However, Saban had nothing to do with this project.

Instead, Sailor Moon debuted in North America, dubbed in the English language.

In 1993, when Bandai was trying to get an English speaking company to dub Sailor Moon, Renaissance Atlantic and Toon Makers showed an interest to which Bandai originally agreed to work with. Rather than dubbing the series, they proposed a live-action project in which the story would have live-action actors on Earth, and character(s) would be in animation form in space, and on other respective planets. They had plans of having their version air on FOX in the fall of 1994. Airing alongside Mighty Morphin Power Rangers possibly. A pilot was filmed and edited, and supposedly three more episodes were in development. However for reasons unknown, this project was later scrapped and not approved by the network. Bandai ultimately decided to allow animation company, DiC Entertainment, to dub the series in English. The Toon Makers and Renaissance Atlantic series was never completed or aired, although many fans wonder what could have came from it.[1] An unaired promotional music video which featured scenes from the series, was shown at a private anime expo in Los Angeles. Someone in the audience who was present at the panel, shot the footage with a camcorder, and it was later infamously shown online being named by fans as "Saban Moon", mistakenly believed to have been produced by Saban.

Despite its origins, the Toon Makers adaptation of Sailor Moon was almost completely different. Rather than the Sailor Guardians fighting on Earth, battles would be held in space on their home planets. Prince Endymion and Princess Serenity's relationship was no longer a forbidden romance, and they were instead betrothed, with Queen Beryl coming to destroy them at the wedding party and steal their jewels. The Sailor Guardians tried to escape with the prince by means of a vortex that led them down to Earth, only for him to be killed by Queen Beryl, leaving only Sailor Moon and the rest of the team able to escape. The main plot of the story was centered on the girls returning to space to prevent Queen Beryl and her minions from attacking the planet Jupiter.[2]

The original characters were depicted differently as well, one reason being that Toon Makers wanted to include a wider range of characters. Several of the girls were from different races with rewritten personalities; Sailor Mercury was a wheelchair-bound redhead who liked parties and showed airheaded tendencies. Sailor Venus was a Latina valley girl who would get angry if one of her nails broke, or, in one occasion, because they had to fight during a gathering that she wanted to attend. Sailor Jupiter was African American and frequently did comedic impressions, while Sailor Mars was the only member who retained her original Asian race. Sailor Moon was depicted as a smart, strong leader. When in space, the Senshi would travel on sailboards called "Sky Flyers", bar Mercury, who traveled on a rocket-powered wheel chair. The promotional video seems to confirm this.

Toon Makers made a two minute music video for the promotion of their live action American remake, perhaps to be shown as a television bumper, commercial, or film preview. In the music video it shows the different Sailor Guardians, now called "Princess Warriors", and other characters such as Luna. The music video was a product of mixed media; When the Sailor Guardians were in their civilian forms, they were shown in live action, but were animated after transforming.

Alongside the pilot, the music video was never publicly shown in the media. However, Allen Hastings of Toon Makers, showed the video at a private computer animation panel at an Anime Expo in Los Angeles.[3]

The video which presumably was not meant to be shown to others outside of the panel, was shot with a camcorder by someone sitting in the audience. The video was later infamously brought online, and mistakenly titled as "Saban Moon", due to many similarities to Power Rangers, due to Renaissance Atlantic producing live-action scenes of the show.

The song that is in the video, is presumably the theme song to the series.

She's got her cat Luna
To give her advice
She's so fine
So stand by her side!

She can get dressed up
And look so sweet
She morphs into a form
That can't be beat!

A cel of Sailor Moon

A cel of Sailor Mercury 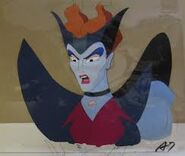 A cel of Queen Beryl 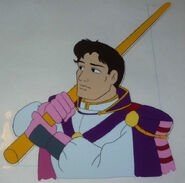 A cel of Prince Endymion