Sailor Lethe of the planet "Lethe" is a Sailor Senshi who joined Sailor Galaxia, along with her sister-senshi Sailor Mnemosyne, after their home planets' demise. She only appears in the manga.

As the Guardian of Truth and twin of Sailor Mnemosyne, Sailor Lethe and her sister joined Shadow Galactica after her planet was destroyed. When Sailor Moon arrived to confront Galaxia, she was confronted by an unbearable heat and a desert, and then came upon a river, where a mysterious boatmen offered her a ride. However, she soon awakes at the bottom of the river, her memories gone, and Lethe attacks her.

Unlike most of the Sailor Guardians under the control of Sailor Galaxia, Sailor Lethe and Sailor Mnemosyne were true Sailor Guardians, and they felt they had no choice but to follow her. Before Galaxia's arrival, the planets of Lethe and Mnemosyne were always at war with one another, and the chaos resulting from the struggles was uncontrollable. Sailor Lethe and Sailor Mnemosyne joined Galaxia hoping that she could bring about a better future for the universe, and end all war once and for all.

Of the two Desert River Sailor Guardians, Lethe was the more aggressive one. Not only did she attack Sailor Moon while she was unable to fight back, but she also killed Luna, Artemis, and Diana in order to make her point about how futile Sailor Moon's life was. Lethe's vengeance was thwarted by her sister, Sailor Mnemosyne, who inadvertently allowed Sailor Moon to remember who she is and resurface with Sailor Chibi Chibi. Despite her betrayal, Lethe could not bring herself to attack her sister, as they both shared the same beliefs and convictions; instead, she reassured Mnemosyne that Sailor Galaxia would make everything all right for them.

Just as Lethe and Mnemosyne allowed Sailor Moon's party to pass through, Sailor Chi and Sailor Phi appeared and killed them, taking the Sailor Crystals of the Sailor Starlights as well as Lethe's and Mnemosyne's. It is a possibility that when all the Sailor Guardians' Star Seeds were freed from the Galaxy Cauldron and thus resurrecting the Senshi, Lethe too was revived.

Art of Sailor Lethe and Sailor Mnemosyne from Artbook V 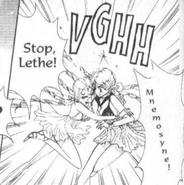 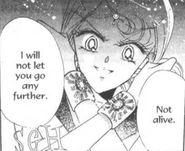 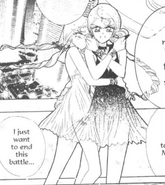 Add a photo to this gallery
Shadow Galactica
Retrieved from "https://sailormoon.fandom.com/wiki/Sailor_Lethe?oldid=238445"
Community content is available under CC-BY-SA unless otherwise noted.