Sailor Lead Crow is the third of the Sailor Animamates to be introduced in the manga.

Lead is element number 82 on the periodic table. The words "lead" and "red" are written the same way in katakana, which is why Lead Crow's outfit and hair have a reddish hue and why TokyoPop mistranslated her name as "Sailor Red Crow" in their manga.

Sailor Lead Crow has long red hair going down to her hips, dark brown eyes, and tanned skin. On her forehead, she has a golden star with a black feather through it and her earrings are red triangles. She wears a brown one-piece bikini with a black corseted front, her sailor collar and boots share the same brown color. Her knickers are red and match the color of her choker, she has two black side panels that look like feathers attached to her bikini. She has black feathery crow wings and similar feathers on her shoulders. Like the other Animamates, she wears the Galactica bracelets.

Sailor Lead Crow first appeared in the manga, in which she attacked and severely injuring Rei's grandfather. She then called out to Phobos and Deimos, who, it turned out, had trained alongside her on the planet Coronis when they were younger. The people of Coronis could turn from crow to human form and back with relative ease; however, Phobos, Deimos, and Lead Crow were the only three left from that planet, as Lead Crow had helped Sailor Galaxia to murder Sailor Coronis and destroy the planet.

Phobos and Deimos are shocked at her revelation and her newfound power, and try to evade her attacks, but are killed. After quickly dispatching her former allies and taking their star seeds, she then turned her attention to Sailor Mars and Sailor Venus and attacked them, grabbing Sailor Mars and threatening Sailor Venus. Before she could properly dispose of them, Eternal Sailor Moon appeared and killed Sailor Lead Crow with Starlight Honeymoon Therapy Kiss.

It was later revealed that Lead Crow and the other Sailor Animamates were not real Sailor Senshi, but were only granted their powers by Galaxia in exchange for killing their home world's true protectors. Lead Crow assumed the powers of Sailor Coronis. 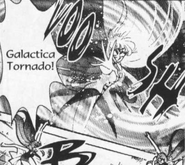