Sailor Lead Crow is the 2nd of the Sailor Animamates to be introduced, along with Sailor Aluminum Siren.

Sailor Lead Crow appeared in Starlights - Ryuusei Densetsu and Kakyuu-Ouhi Kourin - The Second Stage Final, respectively. Along with her fellow minions of Galaxia, she posed as a member of the Dancing Animamates, an "International Dancing Team." She went by the name "Manila Karasu," and was the group's choreographer. This was something of an in-joke, as Lead Crow's actress, Ado Endou, choreographed those two musicals.

In these musicals, she led Sailor Iron Mouse, Sailor Heavy Metal Papillon, and in the second musical, Sailor Aluminum Siren. She wished to become a true Sailor Senshi and was promised by Galaxia that she would become one if she succeeded in the Animamates' mission to kill Sailor Moon and Sailor Saturn. She spoke of a homeland that she said she could never return to and during the climax of the musicals, she, along with Galaxia and the other Animamates, gained Chaos' power. She was eventually purified by Sailor Moon. 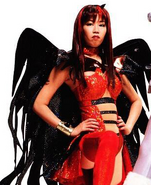