Start a Wiki
Sailor Iron Mouse was one of the four Sailor Animamates, and the first used by Sailor Galaxia in all Sailor Moon incarnations in which she appeared.

Sailor Iron Mouse keeps the same appearance as she does in the manga and anime.

In Sailor Moon Sailor Stars, Sailor Iron Mouse was among the many minions of Galaxia sent to Earth to draw out and destroy the Sailor Senshi there. She performed in Juuban Municipal High School's musical festival while in disguise with her fellow Sailor Animamates. She was played by Chie Maruyama. In Starlights - Ryuusei Densetsu and Kakyuu-Ouhi Kourin, Iron Mouse posed as a member of the Dancing Animamates, an "international dancing team". She went by the name "Chuu Rat" and called herself the top dancer. In those musicals she was the target of teasing, especially about the fact that she ended her sentence with "chuu", the sound of a mouse's squeak; the other characters said that it sounded like manjuu. She was played by Aki Kudou. 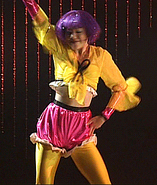 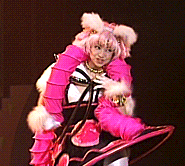 Sailor Iron Mouse in the Chou Very Bad Mates
Add a photo to this gallery
Shadow Galactica
Retrieved from "https://sailormoon.fandom.com/wiki/Sailor_Iron_Mouse_(Sera_Myu)?oldid=228864"
Community content is available under CC-BY-SA unless otherwise noted.