Sailor Galaxia is one of the main antagonists in the final arc of Sailor Moon. She is well known amongst the Galaxy for wreaking havoc and ruining worlds in her quest to obtain the strongest Sailor Crystal. She is the most powerful Sailor Guardian in the galaxy and the ruler of Shadow Galactica.

In her civilian form, Galaxia has long, wavy, hair which is golden orange and gradates into a bright red. She wears a soft lime green dress that reaches down to her feet. She has red eyes.

As a Sailor Guardian, her uniform is not the same as the other Sailor Guardian on the anime and manga. Her Sailor uniform is pure gold (more resembling armour than a dress) with a gold head dress, similar to a Russian kokoshnik, and the brooch containing the Sapphire Crystal sits in the middle of her chest. Her hair has been rolled back to fit into the headress, overall resembling a crown. She wears orange lipstick and light purple eyeshadow.

Sailor Galaxia was born on an unknown planet, which she referred to as "trash", and lived alone and miserable for an unknown amount of time before discovering that she had the power of a Sailor Senshi. She deemed her world not good enough and so started on a quest to find a place she deemed worthy.

While wandering the universe in search of purpose, she became aware of the existence of a place where all the stars were born. One day, she was stopped by an incarnation of Chaos whom looked like Wiseman and mentioned this specific place, and he told her that the birthplace of the stars, the center of the galaxy, was the Sagittarius Zero Star.

Her beginning objective was to find more power, and to do so, she collected all the Sailor Crystals she could find. She formed her base of operations at the Galaxy Cauldron, the birthplace of the stars, and built an empire that she called Shadow Galactica, with her power centered at her castle, Galaxia Palace. As she sought out Sailor Crystals, she gained followers along the way to whom she promised power in return for their service and death to all who refused to join her. Some of those followers killed the Sailor Guardians of their home planets and stole their Sailor Crystals under Galaxia's order, and in turn they used that power to became the Sailor Animamates.

Galaxia knew, however, that Chaos was only helping her in order to have her do its dirty work. She was not powerful enough to defeat Chaos alone, and as a result she planned to use the strongest Sailor Crystal, the Silver Crystal to defeat Chaos. Galaxia came to the Solar System and captured the Sailor Crystals of the Solar System Sailor Guardians, effectively killing them, while also finding other ways to torment Sailor Moon whom she believed was the reason war and evil existed, and thus why in her mind Sailor Moon, Chaos and the Crystal needed to be destroyed. She then recreated the Sailor Guardians' bodies, as well as that of Prince Endymion (as Tuxedo Mask), as her vessels and ordered them to fight Sailor Moon to cause her pain. If Sailor Moon were to succumb to anger and despair, Chaos could take control of her; their two opposing powers would cause both beings to self-destruct, leaving Sailor Galaxia as the strongest Sailor Guardian.

To this end, she threw the Solar System Sailor Guardians' Sailor Crystals into the Galaxy Cauldron, melting them into nothingness, and made Prince Endymion (as Tuxedo Mask) kiss her boots before she threw him in as well. His death effectively caused the disappearance of Sailor Chibi Moon, who had arrived from the future to aid her mother. Sailor Moon's grief infused Chaos with power, but Chaos used that power not to strike Sailor Moon down, but against Galaxia herself, hurling her over the precipice toward the Cauldron. Sailor Moon saved Galaxia and protected her from Chaos' darkness with her own shining light, and when faced with Sailor Moon's purity, hope and love, Galaxia lost her will to fight. Her bracelets then shattered, killing her, her final thoughts being that Sailor Moon is the universe's brightest star, whose power was never hers to have and that she finally learned what it meant to be gifted with her own Sailor Crystal.. To be a Sailor Guardian.

Galaxia was an arrogant Sailor Guardian who was unsatisfied with the power she held. She seemed to have a very large ego as well, since she was convinced that she deserved to have the most powerful star in the entire universe. Other than that she was usually calm and collected, as seen with how she mostly acted when around her minions and Sailor Moon. But, that does not mean she was without a temper.

Sailor Galaxia was the most powerful Sailor Guardians in the galaxy other than Sailor Moon. Her Sailor Crystal, known as the Sapphire Crystal, was the ultimate force of destruction. Galaxia can easily bust planets, and likely stars with her unique method of pointing at them. She's also strong enough to easily battle a full powered Eternal Sailor Moon with the Silver Crystal as well.

As for her abilities, Galaxia can fire orbs of energy from her bracelets that removes a person's Sailor Crystal; She can also generate lightning around herself when displaying her powers. For the most part, Galaxia seems to be able to control energy of a cosmic origin, as seen in her attack, Galactica Super String. She's had random appearances of using Telekinesis and Telepathy to further her plans, mostly in her encounters with Sailor Moon. Like any other senshi, she has the power of flight.

Art of Sailor Galaxia from the Materials Collection 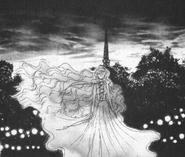 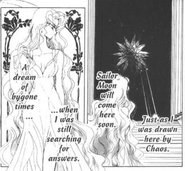