Leader of Shadow Galactica
Self-Proclaimed Ruler of the Galaxy

Causing harm and discord to all who oppose her will

The Flower of Nightmares Scatters: The Queen of Darkness Returns (voice only)
Farewells and Encounters: the Transitioning Stars of Destiny

Sailor Galaxia is the main antagonist in the 5th and final season of the anime and becomes Sailor Moon's strongest and most dangerous of opponents.

In her civilian form, Galaxia has long, wavy, hair that is golden orange which falls to her feet, and graduates to a bright red; she also has red eyes. She wears a soft lime green dress that reaches down to her feet.

In her Sailor Senshi form, she wears a golden uniform that seems to resemble armor more than the normal Sailor uniform. She has matching boots and a gold headdress that resembles a Russian kokoshnik. Her long hair has been rolled back to fit into the headdress, giving an overall crown-like resemblance. Her makeup consists of orange lipstick and light purple eye shadow and her accessories include bracelets, a gold choker, a gold belt, and a brooch.

In her Chaos form, her uniform turns black and so does her headdress and boots. Her skin turns light purple, her lipstick turns dark purple and her hair turns red.

In the anime's 5th and final season, Sailor Galaxia was once ranked as the legendarily strongest Sailor Senshi in the Milky Way Galaxy. She, along with many other planetary Sailor Senshi fought the Sailor Wars against the source of all malice, Chaos, whose very nature was to consume the galaxy and all of its inhabitants. To finally put an end to the bloody conflict that has been spanning for centuries and thereby guaranteeing the safety of the galaxy forever, she decided to seal Chaos in the only one place where no one would be able to free it: inside herself. She used her magical sword to pierce into the heart of Chaos, drawing it into her body and sealing it in.

However, the greatest battle for Sailor Galaxia had only begun when Chaos now began tearing at her soul with each heartbeat and she finally realized that her soul was slowly succumbing to the evil entity's rule. Instead of releasing Chaos, she released her soul, her star seed, into space where it would be untainted by Chaos.

As a soulless Galaxia finally fell under Chaos' control, she became the greatest enemy of the galaxy where once she was its guardian and savior. To become the most powerful being in the universe, she attacked and destroyed worlds and civilizations across space to steal star seeds of sentient beings to control the universe for herself in the name of "Star Galaxia". The power of her golden bracelets, now corrupted heavily by Chaos, kept her alive without a soul and could blast projectile energy that could shred through living sentient beings and extract their star seeds - including the Sailor Senshi of every planet in the universe. During her invasions she also found many followers from each planet to whom she granted the power of her bracelets, in exchange for their star seed, to collect more star seeds for her, who came to be known as the Sailor Animamates.

To enter Earth, her final target, she broke the seal of Queen Nehelenia to force the awakening of the Guardian of Silence, Sailor Saturn, to have her ready for Galaxia to take all the star seeds of the Solar System. After Nehelenia was healed by Sailor Moon, Galaxia began her plan. As Mamoru Chiba was flying to America to begin his studies, Galaxia attacked the airplane he was traveling in and stole his Golden Star Seed, the true Star Seed of Earth, killing him and finally gaining access to Earth. Once this was done, she sent her Sailor Animamates to find true Star Seeds belonging to Sailor Guardians.

In the meantime, her Star Seed traveled long and far before it finally reached the Earth and found Usagi Tsukino attracted to the planet by Usagi's pure power of love. It then took the form of Chibi Chibi and masqueraded as Usagi's sister. However, Chibi Chibi was the Light of Hope, the Star Seed of the "Legendary Guardian" that Princess Kakyuu and the Sailor Starlights were searching for as it was the only power that could defeat Sailor Galaxia. The identity of the legendary soldier, however, remained unknown to them. After numerous failures, Galaxia killed most of her Animamates by force, and eventually confronted the Sailor Guardians. She kills Princess Kakyuu, the Inner and the Outer Sailor Guardians all by herself, stealing all their Star Seeds and becoming more powerful with each star seed she obtained. She finally reveals in episode 199 that she is the legendary Guardian who sealed Chaos, much to Eternal Sailor Moon's and the Sailor Starlights' shock, who believed the legendary Sailor Guardian to be a different person altogether.

During the final battle, Chibi Chibi transformed into a sword to assist Sailor Moon, who had now transformed into Princess Serenity. When Chaos felt overwhelmed by Princess Serenity's power, Chaos overtakes Galaxia's body and she undergoes a transformation and begins battling Princess Serenity. However, the Princess' reluctance to fight her angered Chaos Galaxia even more. During the heated battle, Princess Serenity stabbed Chaos Galaxia's right wing. Galaxia shattered Serenity's sword, and Chibi Chibi disappears. Serenity continues to refuse to fight Sailor Galaxia, as she can see the goodness and bravery of the real Sailor Galaxia that had succumbed to the rule of Chaos long back. She instead gives Galaxia the strength of love and purity, finally expelling Chaos from her body, an act which returns darkness to the minds of all life, where it belongs together with the Light of Hope. The battle finally ends: Sailor Galaxia regains her soul and releases the Star Seeds she had stolen. Galaxia then departs from Earth, leading all of the star seeds she had collected back to where they belonged.

Galaxia as a villain was a cruel and evil being. She carelessly wiped out planets in her quest to obtain Star Seeds, destroying large portions of the galaxy simply out of the fact she considered it a need for her plans. She seems to have a lot of pride and a high level of arrogance as well. As she consistently claimed to be able to do whatever she wanted because she was the strongest in the galaxy.

When she was good, Sailor Galaxia was a kind and caring person, willing to seal away Chaos within herself to save the entire galaxy.

In her battle with Sailor Moon and the Starlights, Galaxia revealed that she has a temper when she cannot have what she wants.

As the strongest of the Sailor Senshi, Galaxia was capable of extreme feats of power. Galaxia could fire blasts or beams of energy with her bracelets. Release golden-colored lightning from her hand, along with controlling the dark lightning she gains from her aura. Like Sailor Saturn, she could destroy planets with ease and she was fast enough to battle the Starlights throughout the entire galaxy and the space around it in a few moments. Not only that but they also destroyed several planets and stars by accident during the clash, with explosions being seen destroying several star systems.

Galaxia consumed in corruption by Chaos

Galaxia being healed from Chaos' influence 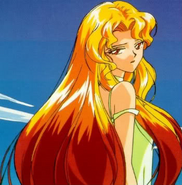 Sailor Galaxia on the cover of her Stars single