Sailor Galaxia is the leader of Shadow Galactica.

Sailor Galaxia retains the same appearance that she has in the manga and anime.

Sailor Galaxia appeared in seven musicals, tying with Queen Beryl for the most appearances of any single villain. In her first three appearances, she enlisted the help of the Sailor Animamates, while in later musicals she was joined by the Amazon Trio, the Shitennou, and Queen Beryl. In several musicals, she transformed into Sailor Chaos, which in that continuity strongly resembled her appearance in the final episode of the anime. She was intensely afraid of Chibi Chibi in the musicals, which led to her subordinates (particularly Queen Beryl and Tiger's Eye) mocking her behind her back for it. In her final musical, she was revived by the Sailor Guardians along with Queen Beryl and the Sailor Animamates.

It's implied that she is very powerful, as she managed to kidnap Neo-Queen Serenity in the musical Pretty Soldier Sailor Moon Sailor Stars. 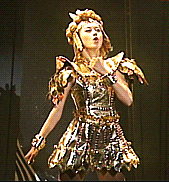 Sailor Galaxia with the Animamates 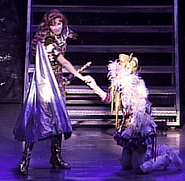 Galaxia without her headdress with Eternal Sailor Moon

Coco Isuzu as Sailor Galaxia.
Add a photo to this gallery