Sailor Cosmos is a form of Sailor Moon from a distant future.

Her appearance was the same as it was in the manga.

The only musical that Sailor Cosmos appeared in was Le Mouvement Final. 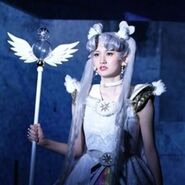 Retrieved from "https://sailormoon.fandom.com/wiki/Sailor_Cosmos_(Sera_Myu)?oldid=228191"
Community content is available under CC-BY-SA unless otherwise noted.