Start a Wiki
Sailor Chaos is one of Sailor Galaxia's forms. In this form, she is completely consumed by Chaos. Sailor Galaxia ended up being totally corrupted by Chaos. When that happened she appeared in a darker version of her sailor uniform, and announced herself as "Sailor Chaos".

Sailor Chaos wears the same outfit as Sailor Galaxia except it's black with stripes of green, red and blue going down her uniform. 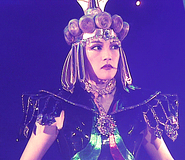 Add a photo to this gallery
Shadow Galactica
Retrieved from "https://sailormoon.fandom.com/wiki/Sailor_Chaos_(Sera_Myu)?oldid=223007"
Community content is available under CC-BY-SA unless otherwise noted.