Sailor Buttress is a character exclusive to one of the Sailor Moon musicals (specifically, Sailor Stars). By definition, buttresses function as decorative supports for buildings, and Sailor Buttress functions the same way to Galaxia. She is Galaxia's adviser, and gives orders to the Sailor Animamates, MC Fly, and Sailor Chi, Sailor Phi, and Sailor Theta. She also announces Galaxia's entry, functioning as a herald.

Her costume is very similar to Galaxia's: its made of a black, leathery material instead of golden metal; and she carries a metal fan. Her black hair is done up in the same fashion as Galaxia's, without the warrior-knot on top. Because of both these facts, she bears a striking resemblance to Chaos Galaxia from the anime, sans wings, with a normal complexion (instead of grey), and retaining the golden bracelets. Nothing of her origin is revealed, although her wearing of the bracelets implies that she no longer has a Star Seed. 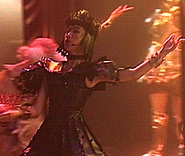