Sailor Aluminum Siren is the 2nd of the Sailor Animamates to be introduced in the manga.

Sailor Aluminum Siren's name follows the same naming pattern as the other Sailor Animamates of "Sailor" + [metal] + [animal]. Siren is a reference to the sirens of Greek mythology, who drew sailors to their deaths with their enchanting voices and music. Although not quite an animal, sirens were originally depicted as bird-like in various ways. They were also later portrayed as fish-like - similar to mermaids - and the two mythical creatures became somewhat interchangeable in popular use and in some languages since. Sailor Aluminum Siren's origin planet, attack name and most of her appearance all reflect mermaid imagery. In the Materials Collection (p.91) [1], Naoko Takeuchi notes that the character was intended to 'control people with song'[2] or 'manipulate songs'[3] (although that power is not used in the manga), which corresponds to her namesake.

Although she has no formal civilian identity in the manga, she is briefly shown blending into a crowd at a concert wearing a spaghetti-strap top or dress along with her earrings which are described below.

Sailor Aluminum Siren has long wavy blue hair that reaches almost to her ankles with blue eyes to match and pale skin. According to the Materials Collection, she is the same height as Sailor Star Maker and manicures her nails to sharp points. Three of her accessories feature a yellow five-pointed star: winged earrings, a lilac ribbon crossed over her face, and a beaded choker with a large scallop shell. In some panels, the star on that ribbon is not shown. Her other accessories are the Galactica Bracelets and a long beaded necklace. She wears a sky blue high-low dress that is open in the center, revealing a lilac v-shaped bikini bottom. The two sides of the dress are tied across her torso with crisscrossing lilac ribbons. The back of her dress features similar ribbons. She has a matching blue sailor collar and suspended socks or stockings. Her outfit is completed with a pair of white high-heeled slingback shoes featuring crisscross straps that come up to her mid-calf.

Since Sailor Aluminum Siren appears so briefly in the manga, her personality is not well developed. On a basic level, she seems to be fairly ruthless - a trait shared by the other members of Shadow Galactica. She is determined to succeed and although she initially only observes the Sailor Guardians, Sailor Aluminum Siren moves in quickly to attack at the next opportunity, further displaying her initiative.

Sailor Aluminum Siren appears in the manga only in Act 51 - Stars 2. She is first shown in the audience at a Three Lights concert. Unlike Sailor Iron Mouse who observed the entire crowd, Aluminum Siren seems to focus on Seiya's performance. The next day, she appears on the rooftop of Juuban Municipal High School, drawn there by Seiya's singing and attacks immediately. She successfully deflects Sailor Uranus' attack, and extracts Sailor Mercury and Sailor Jupiter's Sailor Crystals before being destroyed by the Sailor Starlights.

It is revealed after her death that Sailor Aluminum Siren, like the other Sailor Animamates, was not a real Sailor Guardian but was only granted her powers by Sailor Galaxia in exchange for killing her home world's true protector. In Siren's case, she had usurped the powers of Sailor Mermaid, the Sailor Guardian of the planet Mermaid.

The Materials Collection (p.91) also notes that her voice is "husky" and that 'her hobby is ballads'[4].

She is not shown to have a transformation phrase.

The Materials Collection notes that she fights using ice, though this is not clearly depicted in the manga. 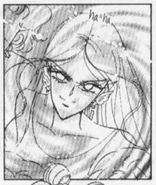 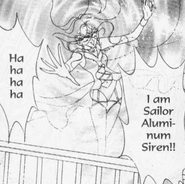 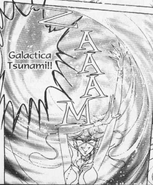