Friend or Foe? Starlights and the Sailor Guardians

Sailor Aluminum Siren is the second of the Sailor Animamates to be introduced, along with Sailor Lead Crow.

Sailor Aluminum Siren's civilian disguise name was Reiko Aya. She uses that form to steal Star Seeds, but when she gets angry, she subconsciously transforms into her true persona.

Her appearance is the same as the manga with only two minor differences: she does not have a second, longer necklace and her stockings are lilac instead of blue.

She is very polite, ditzy and oblivious when off-duty, and is always eating or feeling hungry; once engaged in battle, however, she drops her flaws and becomes completely ruthless.

Sailor Aluminum Siren appeared alongside Sailor Lead Crow when Sailor Galaxia gave Sailor Iron Mouse a final warning that she would be disposed of if she continued to fail. After Sailor Iron Mouse was destroyed for her constant failures, Sailor Galaxia assigned Sailor Aluminum Siren and Sailor Lead Crow in finding true star seeds. Working under the pretense of being talent agents for the Ginga TV station, she works together with Sailor Lead Crow, who reveals that they once competed for the position of Number One Animamate. She often acted a little more ditsy, for example handing out a business card during her first meet with the Sailor Senshi, eating during missions, and sometimes spacing out during important assignments. This ditziness often annoyed Lead Crow, but overall the two got along as friends. She eventually discovers Sailor Moon's identity and nearly succeeds in killing her, but the Sailor Senshi and the Sailor Starlights stopped her. Despite learning their identities, as well as finding a powerful star seed, she did not have a chance to give this information to Galaxia. Galaxia said she failed, but Aluminum Siren, against Lead Crow's advice, politely argued it wasn't her fault for not anticipating more Senshi would fight her. Sailor Tin Nyanko arrived, accusing Aluminum Siren of lying about finding a true star seed and Galaxia removed Aluminum Siren's bracelet and she was destroyed before her horrified friend, Lead Crow.

Aluminum Siren attacking with her bracelets

Aluminum Siren in her nurse disguise 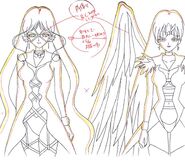 Official sketches of Siren and Crow.