Sailor Aluminum Siren is the 2nd of the Sailor Animamates to be introduced, along with Sailor Lead Crow.

Sailor Aluminium Siren wears a similar outfit to her manga and anime counterparts. Her musical outfit in older musicals is a bit less revealing, with her chest being covered with a one-piece swimsuit. She now has long blue gloves too and no longer has a cross covering her face. She has purple stripes going along her collar, gloves and crossed over her bikini.

In more recent musicals, her outfit is almost exactly identical to the one in the manga and anime.

Her dance costume as Half-Bird consists of a purple strap top, blue skirt and transparent orange bolero. She has the same gloves as when in Sailor Senshi form and wears a short, bright orange wig.

Sailor Aluminum Siren never appeared in the Sera Myu musicals up until Kakyuu-Ouhi Kourin - The Second Stage Final. Like the other Sailor Animamates, she posed as a member of the Dancing Animamates, an "International Dancing Team." She went by the name "Half-Bird" and called herself a "Yuuwaku no Bokorisuto" (誘惑のボコリスト; meaning "tempting vocalist" or "alluring vocalist"). This was probably a reference to the mythological abilities of a siren who was also half-female, half-bird. She also appeared in the new musical Le Mouvement Final. 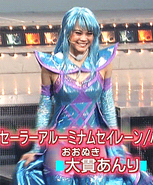 A close up of Aluminium Siren from the image before