"I am the Pretty Guardian who fights for Love and for Passion. I am Sailor Mars! In the Name of Mars, I'll chastise you!"
— Sailor Mars' introduction

Rei: Her given name is in katakana, rei (レイ) and therefore offers no translation or meaning.

In the Chinese versions of the series (anime and manga), Rei's name is written with the character "麗", which carries the same phonetic as "Rei", but means "beauty" and/or "lovely".

Her entire name is structured as a pun, as the syllable "no" indicates a possessive so that her name can also be understood as "Fire of Rei."

Naoko Takeuchi included many occultist arts to finely detail each character. For Rei, these things include:

Rei is a teenage girl with long black hair and blue eyes (although, they are sometimes colored in purple). She is said to be 160 cm of 5'3" in height. Takeuchi described Rei in her notes as being "slender."

Unlike the other Sailor Senshi's school uniforms, her school uniform was very stylish and classy and reflected the elite status of her private school. She wore a gray blouse that had a black collar with red stripes on it, a red bow, a black skirt, white socks with a red stripe, and black shoes.

When she became a high school student in Stars, the red bow on her shirt became black. The difference is said to be due to Rei's being the only Inner Senshi to attend a Roman Catholic school, but if this is the case she has somehow reconciled it with being a shrine priestess. Another outfit she is often seen wearing is her red and white shrine priestess robes. She also always wears her pendant.

Sailor Mars' sailor uniform consists of her tiara, which has a red gem in the center. Six pointed stars dangling from red stud earrings. Her plain red choker. Her sailor collar with three white stripes on it. Her purple front bow with her circular red brooch. Her leotard, which has three white shoulder pads with her deceased mother's brooch, which is a red gem with gold accents on it on her waist. Her gloves are elbow-high with three red bands at the end. Her skirt and back bow are both red. She also wears shiny red high heels.

In the manga, when Sailor Moon became Super Sailor Moon for the first time, the center of Sailor Mars' front bow became a heart, but she did not receive the "Super" upgrade at the time. When she received the "Super" upgrade, her choker had a five-pointed golden star on it with a red gem embedded in the center, the bottom of her sleeves became transparent, the center of her front bow became a heart, and her back bow was enlarged and lengthened.

Rei receives this form in the Stars arc. Her uniform almost appears to be similar to Eternal Sailor Moon's uniform, minus the wings. However, it is red and has lighter red bubble-like sleeves with red bands. Her choker is a "V" shape with a gold star on it. Her chest bow remains purple, but her back bow is a lighter shade of red. The belt is two shades of red ribbons with a star in front. Her gloves are now up to her forearms. Her skirt has two shades of red layered together. She no longer wears the high heels from both her first and super form; she now wears white boots topped with a "V" shape and a star in the center.

After being killed by Sailor Galaxia in Act 49 of the Stars manga, Sailor Mars is revived. Once revived, she wears her Eternal Sailor outfit with bracelets similar to the ones Galaxia wears. The bracelets are gold with a gem on each, one purple and one green.

During the Silver Millennium, Sailor Mars was the princess/ruler of her planet Mars, and she was given the duty of protecting Princess Serenity, along with Sailors/Princesses Mercury, Jupiter, and Venus. She wore a red strap dress that went past her feet and wore a red choker that was tied into a ribbon at the back. She had a necklace and small red stud earrings. She also wore red high-heeled shoes with straps. The symbol of Mars was present on her forehead. She dwelt in Phobos and Deimos Castle.

Rei was an only child and the daughter of Risa Hino and Takashi Hino, a famous politician. Her mother Risa eventually fell ill and died, leaving a grieving Rei who began to despise her father for never visiting her mother once as she was dying in the hospital. Rei would soon move into Hikawa Shrine with her grandfather and work as a shrine priestess as well as befriending two crows named Phobos and Deimos.

Rei would develop psychic powers that she would cultivate by diving through the Sacred Fire at the shrine. However, her abilities would cause people to view her as strange and avoid her.

Once a year on her birthday, Rei would meet with her father and receive Casablanca lilies and a white dress for her to wear, gifts ostensibly picked out by him, but in reality, picked out by his secretary Kaidou, whom Rei had a crush on.

Because Kaidou expressed a disinterest in getting married and having kids, Rei believed them to be kindred spirits. However, Rei eventually found out that her father wanted Kaidou to take over his position when he retired and insisted that Kaidou be married to maintain a good impression. Rei saw him being affectionate with another woman and learned that she was the daughter of another high-class politician from his circle of friends and co-workers. Many people believed she and Kaidou would make the perfect couple.

Rei was devastated by the news because she felt that Kaidou understood her views on marriage, relationships, and love. Kaidou claimed that his marriage was only a political move decided by her father, but Rei called him a liar and said that if Kaidou truly wanted to use marriage as a way to gather power, he would have married Rei herself.

Rei makes her first appearance in the Sailor Moon manga series in Act 3 Rei - Sailor Mars. In the chapter, we first see Rei meditating over a fire and thinking that something disastrous is coming.

In the next scene afterward, we see Rei telling a young girl goodbye. After the girl leaves, Rei looks at her watch and finds out that it is six o'clock. We later see Rei on the same bus that Usagi and Ami are on.

Rei Hino can transform into Sailor Mars by saying Mars Power, Make Up! Her attacks are centered around fire and spiritual attributes. 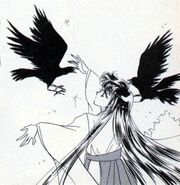 Rei shouting "Mars Planet Power, Make Up!"
Add a photo to this gallery

Rei senses that Mercury and Jupiter have disappeared.
Add a photo to this gallery 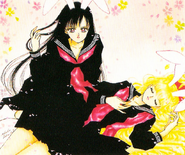 The Inner Sailor Senshi on the cover of volume 10 of the Kanzenban manga.
Add a photo to this gallery

Retrieved from "https://sailormoon.fandom.com/wiki/Rei_Hino_/_Sailor_Mars_(manga)?oldid=233772"
Community content is available under CC-BY-SA unless otherwise noted.