Rei: Her given name is in katakana, rei(レイ) and therefore offers no translation or meaning.

In the Chinese versions of the series (anime and manga), Rei's name is written with the character "麗", which carries the same phonetic as "Rei", but means "beauty" and/or "lovely"

Hino: The kanji of Rei's surname translates hi(火) "fire" and no (野) meaning "field" or "civilian."

The entire name is structured as a pun, as the syllable "no" indicates a possessive so that her name can also be understood as "Fire of Rei."

In the musicals, Sailor Mars's uniform was significantly different. Her elbow fittings, bows, and sleeves were purple, and her skirt, collar, and choker were red. Later in another version of the uniform, her sleeves became red. The center of her front bow was a star and was golden, and it had a red gem in the middle. Unlike the red star earrings that Sailor Mars had in the other versions of Sailor Moon, they were gold instead. She also had a golden star on her choker (when she is not supposed to have one until the "Super" upgrade). All of the trim on her uniform was gold. This outfit never appeared after Sailor Moon S - Henshin - Super Senshi e no Michi (Kaiteiban). 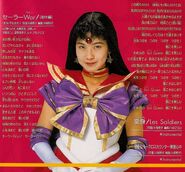 Kyoko Ninomiya as Sailor Mars
Add a photo to this gallery

Retrieved from "https://sailormoon.fandom.com/wiki/Rei_Hino_/_Sailor_Mars_(Sera_Myu)?oldid=227937"
Community content is available under CC-BY-SA unless otherwise noted.