Act 3 - The Third Sailor Guardian is Rei the Miko!

Her given name is in katakana rei (レイ) and therefore difficult to translate. Possible meanings include "spirit" (霊), "companion" (儷), "cool" (冷), "zero" (零), and "bell" (鈴), with the first being most commonly assumed (perhaps due in part to her initial power, "Fire Soul"). Because katakana is the alphabet usually used for foreign loanwords, it may also be intended as a Western name or word, such as Raye, Rae or Ray.

She has shoulder-length black hair and dark brown eyes. Her school uniform is similar to anime and manga, the only difference is the skirt is longer.

When she transforms, Mars' hair becomes longer, going down to her waist, and is a raven-black color.

Sailor Mars' uniform was very similar to the one she wore in the manga and anime. Her uniform consisted of a white leotard with a red skirt, a belt-like separating the leotard and the skirt with a red charm in the center, a redback bow, and a purple front bow. The collar on her leotard was red with three stripes, and her shoulder pads had three layers. Her gloves were white with red elbow fittings and were the only gloves out of the Sailor Guardians that went past her elbows. She wore red high heels, and her accessories were a gold tiara with a red gem in the middle, red earrings with dangling red four-pointed stars, and a red choker.

Rei works at her family's shrine. She is often seen staring into the flames of a fire and can predict the future. She is somewhat a loner, Rei has a difficult time placing her trust in others, and she often depends on herself. She hates karaoke but is eventually forced into pretending to be an idol; singing in front of a crowd at a hospital. She shares a close bond with Minako Aino. Rei does not get along with her father Takashi Hino as he was in parliament while her mother was dying when Rei was younger.

Rei didn't want to be friends with the other girls at the beginning of the series in doing actives for example karaoke because she didn't like singing and she didn't want to have anything to do with her past life which she often argued with Minako about. She eventually warmed up to the other girls and had a strong bond with Minako similar to the one she had with Usagi in the anime.

Rei with the other Sailor Senshi wearing shrine priestess clothes.

Rei and the Inner Sailor Guardians preparing to transform.

Sailor Mars on the 2004 PGSM calendar 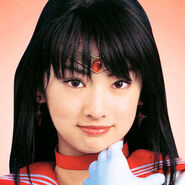 Rei in the Special Act

Rei in the hospital.