Ramua is a Youma owned by Jadeite who helped him by collecting energy from the people who entered her clock store.

She had the appearance of a pale-skinned woman with purple hair, red lines running down her cheeks, and a black star on her cheek.

She masqueraded as the owner of a new shop called the Clock Look, a store that sold a large variety of discounted clocks. The clocks, however, had been cursed and sapped energy from their owners. Usagi and her family managed to get their hands on a few of the clocks and fell under Ramua's spell. The clocks would begin to glow at night, speeding up the buyers' perspective of time. This made the humans then began to speed up and produce large amounts of energy, which Ramua and Jadeite collected.

Luna took Usagi's clock to Ami, who used her computer to analyze it. They found it had no mechanism inside and instead let off a large beam of light. Sensing trouble, Ami, Usagi, and Luna left for the Clock Look, where Usagi transformed into Sailor Moon and blasted a hole in the locked door of the shop. Sailor Mercury followed after but Luna was locked out after the blast-hole fixed itself.

Inside, the two Sailor Senshi confronted Ramua, who then revealed her true form and disappeared into a large clock. Sailor Moon and Sailor Mercury followed her in and found themselves in a dimension that had unstable time fields, at one point reducing Sailor Moon into a small child. After returning to her normal form, Sailor Moon followed Mercury as she guided them through the time field right to Ramua. Before they could attack, however, both of them were are stopped. Sailor Moon collapsed from her energy depletion and Ramua stopped time around Sailor Mercury, preventing her from moving. Ramua attempted to kill them with her spear but they were saved when Tuxedo Mask shattered the face of the large clock with his rose, reversing the energy-draining spell and depleting Ramua's powers, as well as freeing the two Sailor Senshi. Sailor Mercury used her Shabon Spray to cloak the dimension in mist and Sailor Moon then used Moon Tiara Action to destroy Ramua and the dimension.

She has the capability to control the flow of time. 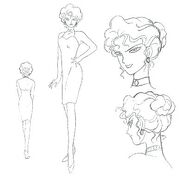