Queen Serenity is the queen of the Moon Kingdom during the Silver Millennium and the mother of Princess Serenity.

Queen Serenity is slender with fair skin and bright silver eyes. She has long silvery-white hair done up in odangos. She wears a white dress with a bow on the top, adorned with a gold crescent brooch. She has a golden-colored crescent moon on her forehead, which is the mark of the Silver Millennium itself and the royal family's symbol.

Long ago, Queen Serenity ruled over the people of the Moon, who had long lives, given to aid their mission to protect the Silver Crystal, while at the same time watching over Earth and guiding it on a good path. Queen Serenity gave the respective castles to Sailor Uranus, Sailor Neptune, and Sailor Pluto when they were born to help protect the solar system from outside threats. She also gave Pluto the job of being the guardian of time and to follow three rules she can't break, she couldn't travel in time, she couldn't leave the Space-Time Door and most important of all to not stop time otherwise it would cost Pluto her life. At some point, Queen Serenity had encountered Queen Nehellenia during the celebration of Princess Serenity's birth. Queen Serenity sealed Nehellenia into a mirror but not before Nehellenia sent a curse that lead to the downfall of the Silver Millennium. Eventually, the evil prophecy was fulfilled, when Queen Metalia arose, taking control of Earth and using its people to incite a war against the Moon Kingdom, leading to the death of Princess Serenity. Queen Serenity gave her life to seal away Metaria and the Dark Kingdom, and what remained of the Silver Millennium was destroyed by the awakened Sailor Saturn, thus everyone was reborn in the present day. When the Inner Senshi and Luna went to the Moon in Act 10, they went into the ruins of the palace, and there found the Holy Blade near the Crystal Tower, inside the Chamber of Prayer. When the sword was removed from the palace floor, the image of Queen Serenity appeared before them, saying that her essence resided in the computer databanks in the ruins of the Moon Kingdom, allowing her to speak with them. She told everyone that she was the one called Selene on Earth, goddess of the Moon, or former Queen of the Moon Kingdom, Serenity. She also told them of the final days leading to the end of the Silver Millennium by the Dark Kingdom.

Serenity then told them that the dark power was reviving, because in her grief of losing her daughter, the seal she placed on Metalia was imperfect, meaning that Queen Metalia was still alive. She explained to Sailor Moon that she had to use the full power of the Silver Crystal to destroy the dark power; because the crystal would follow her heart, she must believe in faith, unity, and love. Before she ran out of power, Queen Serenity told Sailor Moon to remember to live as a young woman because that was why she was reborn on Earth, and asked the other Senshi to protect Sailor Moon and to bring honor to the kingdom. She wished them happiness and her image faded away. She also appeared briefly to give Usagi her new Crystal Star brooch after the defeat of Queen Metalia.

Flashbacks in later story arcs revealed more about Queen Serenity's time ruling the Silver Millenium. She granted the respective planetary castles to Sailor Neptune, Sailor Uranus, and Sailor Pluto upon their birth. She likewise instructed Pluto on the responsibilities of her role as the guardian of space-time, informing her of the three taboos of her station: traveling through time, abandoning her post at the Space-Time Door, and stopping time.

When they fought Queen Nehellenia, the Sailor Senshi learned that Queen Serenity first encountered her during the celebration of Princess Serenity's birth. Nehellenia had infiltrated the Moon, living deep within it, and though Serenity welcomed her so long as she sought peace, it was not to be. Nehellenia asked Serenity to join her instead, mentioning that they had both originated from a distant place, possibly meaning the Galaxy Cauldron. Queen Serenity used the power of the Silver Crystal to seal Nehellenia into her ornate mirror, within which the Queen of the Dead Moon dwelt until encountering the Sailor Senshi. 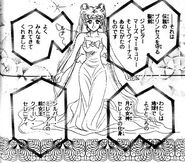 Retrieved from "https://sailormoon.fandom.com/wiki/Queen_Serenity_(manga)?oldid=219716"
Community content is available under CC-BY-SA unless otherwise noted.