Queen Serenity was the queen of the Moon Kingdom in the past. She only appeared twice in the musicals, in the most recent musical Pretty Guardian Sailor Moon - La Reconquista and in Amour Eternal. She also made an appearance in the Nogizaka46 Musical but as a projection.

She retains her appearance from the manga, anime, and Crystal. In this continuity, her hair is light purple. 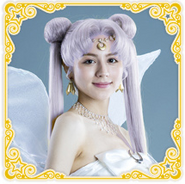 Retrieved from "https://sailormoon.fandom.com/wiki/Queen_Serenity_(Sera_Myu)?oldid=228212"
Community content is available under CC-BY-SA unless otherwise noted.