Queen of the Moon Kingdom

Her homeland and people

Her loved ones being threatened
Evil forces

Queen Serenity was the queen of the Moon Kingdom during the Silver Millennium and the mother of Princess Serenity.

Queen Serenity is slender and tall with fair skin and bright silver eyes. She has long silvery-white hair done up in odango. She wears a white dress with a bow on the top, adorned with a gold crescent brooch. She has a golden-colored crescent moon on her forehead, which is the mark of the Silver Millennium itself and the royal family's symbol.

Queen Serenity was the dear mother of Princess Serenity; thousands of years ago and the tender-hearted ruler of the Moon Kingdom, known as Silver Millennium. When all hope was nearly lost, she had used the last her strength to use the Silver Crystal's immense power to seal her enemies away and have her beloved daughter and faithful subjects reborn and reincarnated on planet Earth until they would be needed again for a future. Sadly, her heroic act had sapped her of her very life-force and she had "perished" but not before she had her most trusted advisers, Luna and Artemis, put into stasis until they could be awoken to find the reborn Sailor Senshi reincarnated as human beings and form the Sailor Team. She appears in Episode 10 of as a hologram to assist her reborn daughter and faithful friends on their quest to defeat Queen Beryl. 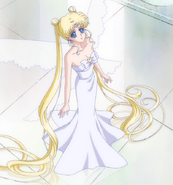 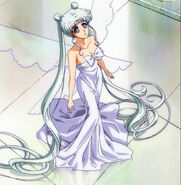 Queen Serenity's spirit conversing with the Sailor Senshi.
Add a photo to this gallery

Retrieved from "https://sailormoon.fandom.com/wiki/Queen_Serenity_(Crystal)?oldid=232674"
Community content is available under CC-BY-SA unless otherwise noted.