In a mirror located in the Dead Moon Circus tent

Her youth, beauty, and charm

Queen Nehelenia is an exceptionally lovely, youthful, graceful and beautiful woman with white skin with pointed ears and extremely long, flowing, wavy dark blue hair. Her hair is mostly down apart from two buns and two ponytails coming from those buns. Her fringe is similar to Usagi's except it is sharper and she has slim light blue eyes with slit-shaped pupils. Her dress is black with puffy sleeves below her shoulders and longer skin-tight sleeves going down to her wrists, her top only covers her breasts and the skirt is covered by a beige overskirt. She has a lavender cape that goes down to the floor and wears gold and black bracelets and a necklace with a similar style. Her earrings and headpiece consist of three silver moons (one being golden) and she wears a black circular gem as a crown. She was also considered the loveliest, fairest and most beautiful being in the Dead Moon Circus.

When Queen Nehelenia was good she wore the same outfit but her skin was a natural human skin tone and her eyes were larger and bright blue.

As a child, Queen Nehelenia looks similar to her adult self. Child Nehelenia has the same dark blue hair but instead of it flowing down to the ground, it is in two short ponytails like Chibiusa's hair, she retains her fringe and odangos. Her dress is identical to her adult self but her jewelry is less numerous and intricate with her only having a simple necklace, stud earrings, and crown. Her necklace is a simple gold choker with a red gem, her earrings are white studs and her crown is a simplified version of her adult self.

Character design sheets show that Queen Nehelenia has a spiderweb pattern on the back of her cloak. It also shows she has a long black bow on the back of her dress and she wears black high heeled sandals with a design similar to her crown on them. This may not be seen so easily in the anime due to her long dress and cloak.

Queen Nehelenia, then known as Queen Helenia, ruled over her own kingdom of peace and harmony in which her subjects all adored her. She took great pride in the fact her subjects always complimented her of her great beauty. Because Queen Nehelenia dreamed of staying young forever, she gazed at her reflection in the mirror to see her future but instead saw herself as an ugly old woman. In turn, this caused her to become obsessed with remaining young and beautiful forever, and so she extracted the dream mirrors of her subjects and turned them into Lemures, allowing her to stay young forever. Zirconia was then created from her fears of becoming ugly. She formed the Dead Moon Circus, but the Dark Moon wasn't nearly as nice a place to live as the Moon Kingdom, which she watched from the Dark Moon, so she wanted to take over the Moon Kingdom and take Queen Serenity's place as ruler of Silver Millennium and eventually Crystal Tokyo. When she learned of the Golden Crystal, she tried to get it from its guardian, Helios, but was unable to; due to her evil intentions, and was eventually sealed inside a mirror of darkness by Queen Serenity.

Queen Nehelenia was able to reawaken when the great power of Elysion weakened due to people giving up on their good dreams, though she was still trapped inside a mirror. She then captured Helios and imprisoned his physical body inside Nehelenia's mirror, where she imprisoned him in spider-like threads in a red cage, but the pure golden light from Chibiusa's lovely dreams turned his spirit into Pegasus, who then remained in the dream world, only able to enter the real world as an illusion.

At some point, the venomous Queen Nehelenia was discovered inside of a dream mirror by the Amazoness Quartet, and she gave them mystic orbs to give them more strength and keep them young and lovely forever. The four girls agreed to work for her as her loyal subjects and minions.

Nehelenia then commanded Zirconia to find the person whose lovely dreams Pegasus was hiding inside. At a solar eclipse, the Dark Moon Circus was able to arrive on Earth and began seeking out the holder of Pegasus. After the Amazon Trio became complete humans from Pegasus' aid, Queen Nehellenia told Zirconia that the golden dream-mirror of the holder of Pegasus had to be found immediately.

Eventually, Nehelenia plunged the world into darkness and covered it with spider-like threads. Once Sailor Chibi Moon was imprisoned inside her mirror by Zirconia, Nehelenia used her golden dream mirror, forced Pegasus to become Helios again, and took the Golden Crystal, allowing her to escape the mirror, destroying Zirconia in the process. Nehelenia fought the Super Sailor Guardians and gained the advantage until the Amazoness Quartet switched the Golden Crystal for a pineapple and gave it to Super Sailor Moon. With the help of everyone on Earth, Super Sailor Moon and Super Sailor Chibi Moon used the fully energized Golden Crystal to shoot an extremely powerful beam of golden energy at Nehelenia, defeating both her and destroying the circus tent.

However, Nehelenia survived and lifted the remains of the main circus tent toward the Dark Moon, kidnapping Super Sailor Chibi Moon, who was unconscious. Super Sailor Moon followed her to the top of the circus tent, where, as a result of the battle, Nehelenia's beauty and youth diminished, turning her into an ugly old crone. She threw Super Sailor Chibi Moon over the edge, and Super Sailor Moon jumped after her, aided by Pegasus. Nehelenia then returned to her mirror, sealing herself inside it once again, and returning to the dark moon inside her mirror to sustain her exceptional beauty, youth and charm for all eternity.

Unlike the manga, she was discovered by Sailor Galaxia who released her from the mirror and took advantage of her jealousy and venom towards the Silver Millennium to awaken the spirit of Sailor Saturn deep within Hotaru Tomoe. Once released from her mirror of silence, Nehelenia gradually corrupted Mamoru with a shard stuck in his eye. This caused the other Super Sailor Guardians' to try and fight her off, but was defeated; one by one. Eventually, only Usagi was left un-transformed and she learns about her past. Despite Nehelenia's attempts to make her hate her so she can destroy her, Usagi refuses to hate her and instead forgives her for her actions of vengeance. Nehelenia was finally able to realize the true friendship and kindness that she never had.

Her change of heart had liberated Mamoru from the mirror fragment and frees the other eight Super Sailor Guardians' trapped in the mirrors. Usagi then transforms into Eternal Sailor Moon and using the vastly strong healing powers of the Eternal Tiare, she was able to thaw Queen Nehelenia's ice-cold heart and give her a second chance at a new life. Thinking it was all just a dream, her child form wakes up in front of her subjects who tell her she was merely sleeping. Before she leaves to rest, she asks if anyone will read her a bedtime story. One of the subjects agrees and the reborn Nehelenia smiles in appreciation.

Queen Nehelenia can shoot energy waves of shadows and darkness, and also spider-like threads. She is also impervious to even the strongest of most attacks; except those of Super Sailor Saturn. The Golden Crystal increases and multiplies her own abilities tremendously. She could also emit bursts of pure dark energy that cause intense pain and agony to her opponents, which she can strengthen and intensify if need to.

Queen Nehelenia as an old, unattractive lady; her doomed future foretold by the magic mirror she possessed. 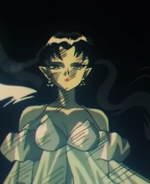 Nehelenia released from the seal of the New Moon

Queen Nehelenia reveals herself before the ten Super Sailor Senshi 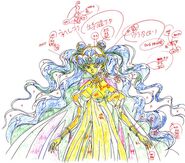 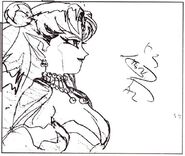 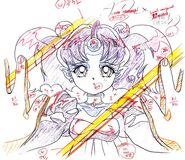 Retrieved from "https://sailormoon.fandom.com/wiki/Queen_Nehelenia_(anime)?oldid=240388"
Community content is available under CC-BY-SA unless otherwise noted.